The location or design of this site makes wheelchair access impossible.

Ancre British Cemetery is about 2 kilometres south of the village of Beaumont-Hamel, on the D50 between Albert and Achiet le Grand.

The village of Beaumont-Hamel was attacked on 1 July 1916 by the 29th Division, with the 4th on its left and the 36th (Ulster) on its right, but without success. On 3 September a further attack was delivered between Hamel and Beaumont-Hamel and on 13 and 14 November, the 51st (Highland), 63rd (Royal Naval), 39th and 19th (Western) Divisions finally succeeded in capturing Beaumont-Hamel, Beaucourt-sur-Ancre and St. Pierre-Divion. Following the German withdrawal to the Hindenburg Line in the spring of 1917, V Corps cleared this battlefield and created a number of cemeteries, of which Ancre British Cemetery (then called Ancre River No 1 British Cemetery, V Corps Cemetery No. 26) was one. The original burials were almost all of the 63rd and 36th Divisions, but after the Armistice the cemetery was greatly enlarged when many more graves from the same battlefields and from smaller burial grounds in the area were brought into it. The majority of those buried in the cemetery died on 1 July, 3 September or 13 November 1916. There are now 2,540 Commonwealth casualties of the First World War buried or commemorated in the cemetery. 1,335 of the graves are unidentified, but special memorials commemorate 43 casualties known or believed to be buried among them. There are also special memorials to 16 casualties know to have been buried in other cemeteries, whose graves were destroyed by shell fire. The cemetery was designed by Sir Reginald Blomfield. 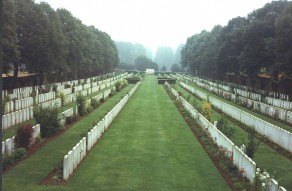