Bancourt is a village which lies approximately 4 kilometres due east of Bapaume on the north side of the D7, Bapaume to Bertincourt road. Bancourt British Cemetery is situated east of Bancourt village, 300 metres off the D7 on the north side. The CWGC direction signs on the D7 indicate the best approach to the cemetery.

Bancourt was occupied by Commonwealth forces in March 1917. It was lost a year later during the German offensive in the spring of 1918 but recaptured by the New Zealand Division (in particular, the 2nd Auckland Battalion) on 30 August 1918. The cemetery was begun by the New Zealand Division in September 1918; the original cemetery is now Plot I, Rows A and B. The remainder of the cemetery was made after the Armistice when graves were brought in from the battlefields east and south of Bancourt and from certain Allied and German cemeteries. The great majority of these graves dated from the winter of 1916-1917, the retreat of March 1918, or the advance of August-September 1918. Bancourt British Cemetery now contains 2,480 burials and commemorations of the First World War. 1,462 of the burials are unidentified but there are special memorials to 43 casualties known or believed to be buried among them, and to one soldier buried in Bapaume Reservoir German Cemetery, whose grave could not be found on concentration. The cemetery was designed by Sir Edwin Lutyens. 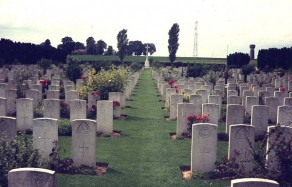