Villers-Bretonneux is a village in the Department of the Somme, and lies on the N29 road from Amiens to St Quentin. Enter the village of Villers-Bretonneux on the D23 heading south. At the crossroads head in the direction of Demuin and Mozeuil, remaining on the D23. Two CWGC signposts will be seen. On leaving the village, carry on south for 2 kilometres, still on the D23 Demuin road. After passing over the A29 Motorway (Amiens-St Quentin), the cemetery is signposted down a side road on the right.

The site became famous in 1918, when the German advance on Amiens ended on 23 April in the capture of Villers-Bretonneux by German tanks and infantry. On the following day the 4th Australian and 5th Australian Divisions, with units of the 8th and 18th Divisions, carried out "an enterprise of great daring", (Sir Douglas Haig's Despatch of 20 July 1918) and recaptured the whole of the village. The cemetery was begun by the Canadian Corps in August 1918 and closed in the same month. The original British Cemetery (now Plot I, Rows A to D) contained 90 burials, and French troops buried in Plot II at the same time. The cemetery was greatly enlarged after the Armistice when graves were brought in from the battlefields between the Somme and the Luce. Cricifix Corner Cemetery contains 660 Commonwealth burials of the First World War. 191 of the burials are unidentified but there are special memorials to two casualties known or believed to be buried among them. 16 American, 241 French and ten German graves have since been removed to other cemeteries, but 141 French and two Russian burials remain. The cemetery was designed by Sir Edwin Lutyens. 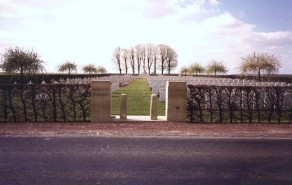