Authuille is a village 5 kilometres north of the town of Albert on the D151 road to Grandcourt. The Cemetery (signposted in the centre of Authille) is 1 kilometre east of the village. Access to the cemetery, 500 metres from the road, is by a grass pathway (unsuitable for cars).

On 1 July 1916, the first day of the Battle of the Somme, the 32nd Division, which included the 1st Dorsets and the 11th (Lonsdale) Battalion of the Border Regt attacked the German line at this point and stormed the Leipzig Salient, but were compelled to retire later in the day. In the spring of 1917, after the German withdrawal to the Hindenburg Line, V Corps cleared these battlefields and made a number of new cemeteries, including Lonsdale No. 1 and No. 2. Lonsdale Cemetery No. 1 (the present Lonsdale Cemetery) contained originally 96 graves (now in Plot I), the great majority of which were those of officers and men of the 1st Dorsets and the 11th Borders. It was enlarged after the Armistice when graves, almost all of 1916, were brough in from the surrounding battlefields and from other small burial grounds, including Lonsdale No. 2. Lonsdale Cemetery now contains 1,542 Commonwealth burials and commemorations of the First World War. 816 of the burials are unidentified but there are special memorials to 22 casualties known or believed to be buried among them. The cemetery was designed by Sir Herbert Baker. 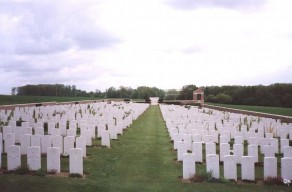