The cemetery is located 10 kilometres south of Kassel and 2 kilometres from the main road from Kassel to Marburg. Approach Kassel on the A49 motorway leaving at junction Kassel Niederzwehren, which forms the Frankfurter Strasse. The first right hand turning leads into the Dittershauser Strasse. Continue on this road which becomes a narrow road at the bend. Follow the bend to the right, where the cemetery is clearly signposted, which leads to a small crossroads. Turn left at the crossroads where Niederzwehren Cemetery becomes visible from the roadside. The Commonwealth plots now form a separate cemetery lying beside the Russian cemetery. 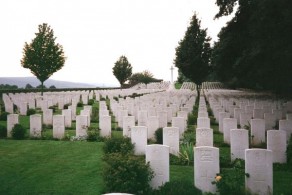