Montauban village was taken by the 30th and 18th Divisions on 1 July 1916 and it remained in Commonwealth hands until the end of March 1918. It was retaken on 25 August 1918 by the 7th Buffs and the 11th Royal Fusiliers of the 18th Division. Quarry Cemetery was begun (at an advanced dressing station) in July 1916, and used until February 1917. The Germans buried a few of their dead in Plot V in April and May 1918. At the Armistice it consisted of 152 graves in the present Plots V and VI. It was then increased when graves (almost all of July-December 1916) were brought in from the battlefields and small burial grounds* surrounding Montauban. Quarry Cemetery now contains 740 Commonwealth burials and commemorations of the First World War. 157 of the burials are unidentified but there are special memorials to seven casualties known or believed to be buried among them. Other special memorials commemorate 19 soldiers buried in Quarry Scottish Cemetery, Green Dump Cemetery and Caterpillar Wood Cemetery No. 2, whose graves could not be found on concentration. The cemetery also contains 16 war graves of other nationalties. The cemetery was designed by Sir Herbert Baker. * BRIQUETERIE CEMETERY No. 3, MONTAUBAN, was on the east side of the brick-works on the Longueval-Maricourt road. It contained the graves of 23 soldiers (mainly 1/5th K.O.R.L.) who died in July and August 1916. CATERPILLAR WOOD CEMETERY No. 2, MONTAUBAN, was at the east end of Caterpillar Wood, north-west from Montauban village. It was begun by the 2nd Suffolks and contained the graves of 50 soldiers who died between July 1916 and January 1917. GREEN DUMP CEMETERY, LONGUEVAL, 1.2 kilometres west of Longueval village. It contained the graves of 54 soldiers who died between August and October 1916. QUARRY SCOTTISH CEMETERY, MONTAUBAN, was between the Quarry and the north end of Bernafay Wood. It contained the graves of 55 soldiers (largely 11th and 12th Royal Scots) who died in July 1916. 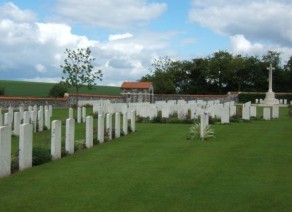 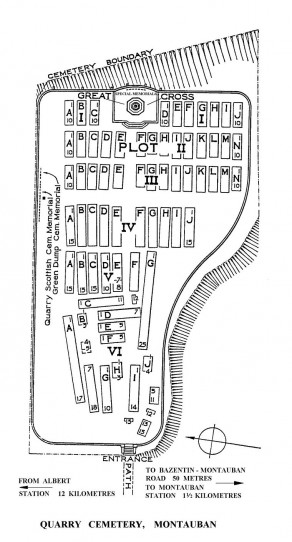