Puisieux is a village 15 kilometres north of Albert and 26 kilometres south of Arras. The easiest way to reach the cemetery is to follow the D919 from Arras (sometimes indicated as N319), through the villages of Ayette, Bucquoy and Puisieux. Continue along this road, past the tiny village of Serre-les Puisieux, until you come to a large farm surrounded by tall poplar trees and adjacent to the large Serre Road Cemetery No.1. On your right you will see a set of CWGC direction signs indicating the way to a group of small cemeteries and the Sheffield Memorial Park. Queens Cemetery Puisieux is the second cemetery along the dirt track. It is situated in open fields facing the memorial park.

The village of Puisieux was taken by Commonwealth forces on the 28 February 1917, lost on the 26 March 1918 and recovered on the following 21 August. In the spring of 1917, the battlefields of the Somme and Ancre were cleared by V Corps and a number of new cemeteries were made. Queens Cemetery (originally known as Queens V Corps Cemetery No 4) is on the old front line of July 1916, south of Mark Copse, one of four small plantations that were on or close behind the line between Serre and Hebuterne. The graves are of casualties of the 31st, 3rd and 19th Divisions who died in July and November 1916, and February 1917. There are now 311 First World War burials in the cemetery, 131 of them unidentified. The cemetery was designed by N A Rew. 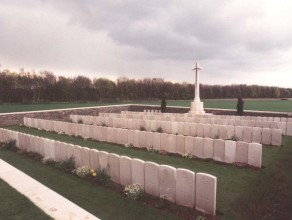 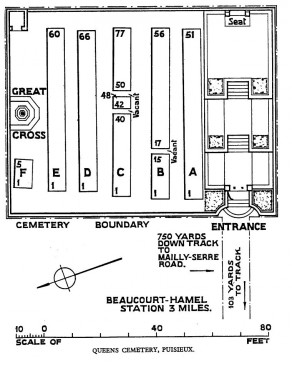