Redoubt Cemetery is on the west side of the Krithia-Seddel Bahr road, south-west of "The Vineyards", 100 metres along a track flanked by pine trees. It faces south to the entrance of the Dardanelles.

The eight month campaign in Gallipoli was fought by Commonwealth and French forces in an attempt to force Turkey out of the war, to relieve the deadlock of the Western Front in France and Belgium, and to open a supply route to Russia through the Dardanelles and the Black Sea. The Allies landed on the peninsula on 25-26 April 1915; the 29th Division at Cape Helles in the south and the Australian and New Zealand Corps north of Gaba Tepe on the west coast, an area soon known as Anzac. On 28 April, following the landings at Helles, the first attack was mounted towards Achi Baba, the ridge which dominates the southern part of the peninsula. Fatigue, however, brought the assault to a halt some kilometres short of the objective, near the village of Krithia. Turkish counter attacks followed but were repulsed and during the period 6-8 May, the 29th and French Divisions, reinforced by the 2nd Australian and New Zealand Infantry Brigades, carried out a renewed attack on Krithia, making some gains but suffering heavy casualties. Between 1 May and the beginning of June, the 29th Indian Infantry Brigade and 42nd (East Lancashire) Division landed on the peninsula. With these reinforcements, the Allied force at Helles pushed forward once more on 4 June, but again to little effect. A further attack between 28 June and 5 July at Gully Ravine inflicted heavy casualties on the Turks, but despite local gains - at one point the line was pushed forward more than a kilometre - there was no breakthrough. By 13 July the advance at Helles was effectively over and the position remained unchanged until the evacuation in January 1916. Redoubt Cemetery takes its name from the chain of forts made by the Turks across the southern end of the peninsula in the fighting for Krithia and the Redoubt Line on which the advance halted in May. The cemetery was begun by the 2nd Australian Infantry Brigade in May 1915 and continued in use until the evacuation. It was greatly increased after the Armistice when the battlefields were cleared and graves were brought in from small cemeteries in the vicinity. There are now 2,027 servicemen of the First World War buried or commemorated in this cemetery. 1,393 of the burials are unidentified but special memorials commemorate 349 casualties known or believed to be buried among them. 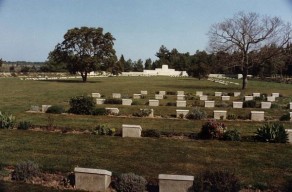 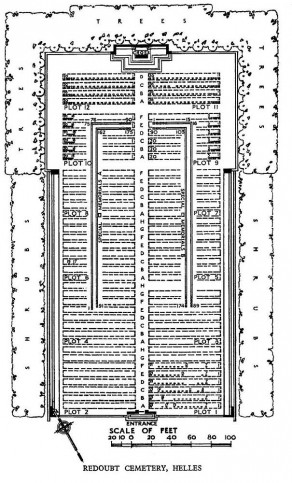