OPENING TIMES: Every day throughout the year: 07.00 to 17.00 hrs. NOTE: The earth is shallow on Malta and during both wars, many joint or collective burials were made as graves had to be cut into the underlying rock. During the Second World War, such work was particularly hazardous because of air raids. Most of these graves are marked by recumbent markers on which several inscriptions could be carved, and for the sake of uniformity, the same type of marker was used for single graves.

This Cemetery lies south on the outskirts of the village of Paola and is about 5 kilometres away by road from Valletta. The Cemetery is easily located by following the road signs to the airport. Once in the vicinity of Paola the Cemetery is clearly visible. In the cemetery, the main plot is located by the top gate.

From the spring of 1915, the hospitals and convalescent depots established on the islands of Malta and Gozo dealt with over 135,000 sick and wounded, chiefly from the campaigns in Gallipoli and Salonika, although increased submarine activity in the Mediterranean meant that fewer hospital ships were sent to the island from May 1917. During the Second World War, Malta's position in the Mediterranean was of enormous Allied strategic importance. Heavily fortified, the island was never invaded, but was subjected to continual bombardment and blockade between Italy's entry into the war in June 1940 and the Axis defeat at El Alamein in November 1942. At the height of Axis attempts to break Malta's resistance in April 1942, the island and her people were awarded the George Cross by King George VI. Malta's defence relied upon a combined operation in which the contributions made by the three branches of the armed forces and Merchant Navy were equally crucial. Although heavily pressed in defence, offensive raids launched from the island by air and sea had a crippling effect on the Axis lines of communication with North Africa, and played a vital part in the eventual Allied success there. Addolorata Cemetery contains 250 Commonwealth burials of the First World War and 18 from the Second World War. Many of the graves will be found in two plots, one in Compartment A, Section EA, Division E and the other in Compartment D Section V Division E; the rest of the graves are scattered. The Commission also cares for 46 war graves of other nationalities within the cemetery. 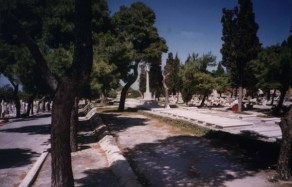 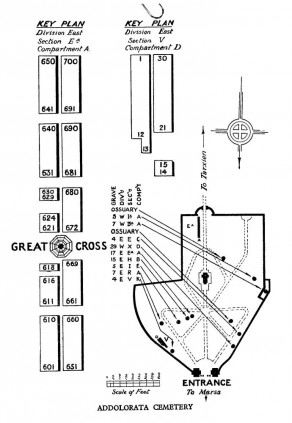