Villers-Bretonneux is a town 16 kilometres east of Amiens and the Cemetery is situated west of the village on the north side of the main road from Amiens to St. Quentin.

Villers-Bretonneux became famous in 1918, when the German advance on Amiens ended in the capture of the village by their tanks and infantry on 23 April. On the following day, the 4th and 5th Australian Divisions, with units of the 8th and 18th Divisions, recaptured the whole of the village and on 8 August 1918, the 2nd and 5th Australian Divisions advanced from its eastern outskirts in the Battle of Amiens. Adelaide Cemetery was begun early in June 1918 and used by the 2nd and 3rd Australian Divisions. It continued in use until the Allies began their advance in mid August, by which time it contained 90 graves (the greater part of the present Plot I, Rows A to E). After the Armistice a large number of graves were brought into the cemetery from small graveyards and isolated positions on the north, west and south of Villers-Bretonneux and they were, without exception, those of men who died in the months from March to September 1918. Plot I was filled, Plot II was made almost entirely with graves from United Kingdom units, and Plot III almost entirely with Australian. There are now 955 Commonwealth servicemen of the First World War buried or commemorated in this cemetery. 261 of the burials are unidentified but there are special memorials to four casualties known, or believed to be buried among them. The cemetery was designed by Sir Edwin Lutyens. On 2 November 1993, following a request by the government of Australia, an unknown Australian soldier killed in the First World War was exhumed from Plot III, Row M, Grave 13, and is now buried in the Australian War Memorial in Canberra. 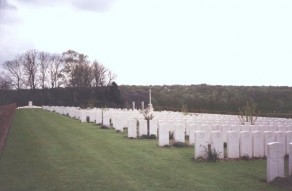