Becourt is 2 kilometres on the east side of Albert. The Military Cemetery is on the south side of the road from Becourt to Albert.

The Military Cemetery was begun in August, 1915, by the 51st (Highland) Division, and carried on by the 18th and other Divisions in the line until the Battles of the Somme, 1916. It continued in use, chiefly by Field Ambulances, until April, 1917; and Plot II was made by the 18th Division at the end of August, 1918. There are now over 700, 1914-18 war casualties commemorated in this site. Of these, a small number are unidentified and a special memorial is erected to a soldier from the United Kingdom buried among them. Three German graves have been removed. The cemetery covers an area of 4,327 square metres and is enclosed by a rubble wall. 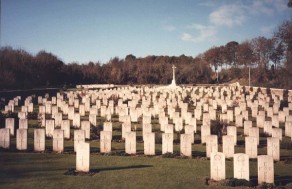