Zillebeke village and most of the commune were in the hands of Commonwealth forces for the greater part of the First World War, but the number of cemeteries in the neighbourhood bears witness to the fierce fighting in the vicinity from 1914 to 1918. Bedford House, sometimes known as Woodcote House, were the names given by the Army to the Chateau Rosendal, a country house in a small wooded park with moats. Although it never fell into German hands, the house and the trees were gradually destroyed by shell fire. It was used by field ambulances and as the headquarters of brigades and other fighting units, and charcoal pits were dug there from October 1917. In time, the property became largely covered by small cemeteries; five enclosures existed at the date of the Armistice but the graves from No. 1 were then removed to White House Cemetery, St. Jean, and those from No. 5 to Aeroplane Cemetery, Ypres. ENCLOSURE NO. 2 was begun in December 1915, and used until October 1918. After the Armistice, 437 graves were added, all but four of which came from the Ecole de Bienfaisance and Asylum British Cemeteries, both at Ypres. ENCLOSURE NO.3, the smallest, was used from February 1915 to December 1916; the burials made in August-October 1915 were largely carried out by the 17th Division. ENCLOSURE NO. 4, the largest, was used from June 1916 to February 1918, largely by the 47th (London) Division, and after the Armistice it was enlarged when 3,324 graves were brought in from other burial grounds and from the battlefields of the Ypres Salient. Almost two-thirds of the graves are unidentified. ENCLOSURE NO. 6 was made in the 1930s from the graves that were continuing to be found on the battlefield of the Ypres Salient. This enclosure also contains Second World War burials, all of them soldiers of the British Expeditionary Force, who died in the defence of the Ypres-Comines canal and railway at the end of May 1940. The canal lies on high ground on the west side of the cemetery. In all, 5,139 Commonwealth servicemen of the First World War are buried or commemorated in the enclosures of Bedford House Cemetery. 3,011 of the burials are unidentified but special memorials commemorate a number of casualties known or believed to be buried among them. Other special memorials name casualties buried in other cemeteries whose graves could not be found on concentration. Second World War burials number 69 (3 of which are unidentified). There are 2 Germans buried here. The cemetery was designed by W C Von Berg. 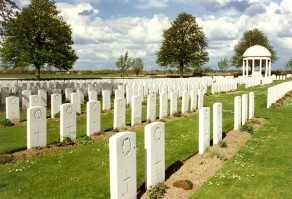