St. Souplet village was captured by the American 30th Division on the 10th October, 1918. The American troops made a cemetery of 371 American and seven British graves on the South-West side of the village, on the road to Vaux-Andigny; and a smaller British cemetery was made alongside. The American graves were removed after the Armistice, one being taken to the British cemetery with the seven British graves; and other British graves were brought in from other burial grounds and from the battlefields. There are now nearly 750, 1914-18 war casualties commemorated in this site. Of these, one-fifth are unidentified and special memorials are erected to 55 soldiers from the United Kingdom, buried in other cemeteries, whose graves could not be found. The cemetery covers an area of 2,504 square metres and is enclosed by a stone rubble wall. The following are brief particulars (including the numbers of British graves and their dates) of some of the cemeteries from which British graves were brought to St. Souplet: BOHAIN BRITISH CEMETERY (34, and one American and eleven German, Oct.-Nov. 1918), at the South-East end of the village, behind the Hotel Dieu. Bohain was taken by the 6th Division 9th Oct., 1918. CREVECOEUR-SUR-L'ESCAUT CHURCHYARD (8, and one Italian, 1917-18, all buried by the enemy). ESTREES COMMUNAL CEMETERY GERMAN EXTENSION (Aisne) (6, March, 1918). FESMY CHURCHYARD (18, 1914 and 1918, all buried by the enemy). Fesmy was defeated by the 2nd Munsters Aug., 1914, and captured by the 1st Northants Nov., 1918. LANCHY CHURCHYARD FRENCH MILITARY EXTENSION (3, March, 1918). L'EPINE-DE-DALLON MILITARY CEMETERY (or ST. QUENTIN-ROUPY ROAD GERMAN CEMETERY). MAROILLES COMMUNAL CEMETERY GERMAN EXTENSION (6, Nov., 1918, and Nov., 1919, all buried by British). MONTBREHAIN COMMUNAL CEMETERY GERMAN EXTENSION (6, 1917-18) NOYELLES-SUR-L'ESCAUT GERMAN CEMETERY (10, May-Sept., 1917), close to the Communal Cemetery. OISY CHURCHYARD (one, Aug., 1914) ORIGNY-STE. BENOITE GERMAN CEMETERY (23, March-April, 1918), a permanent cemetery at the South-East end of the village. OVILLERS OLD COMMUNAL CEMETERY, SOLESMES (30, Oct.-Nov., 1918, buried, by the 38th Division in the North-East corner). PREMONT COMMUNAL CEMETERY GERMAN EXTENSION (22, 1917-18). ST. MARTIN MILITARY CEMETERY, ST. QUENTIN (134), a great permanent cemetery of over 8,000 graves on the West side of the city, begun in 1914 and extended after the Armistice. ST. SOUPLET COMMUNAL CEMEMTERY (10, 1917-18). SAULZOIR COMMUNAL CEMEMTERY EXTENSION (one, Nov., 1917, and 33 buried by the 4th Division Oct.-Nov., 1918). SOLRE-LE-CHATEAU COMMUNAL CEMETERY GERMAN EXTENSION (7, 1918; two buried by Germans and five by British). TROISVILLES COMMUNAL CEMETERY EXTENSION (18, Oct., 1918), made by British troops. URVILLERS MILITARY CEMETERY (14 of 14th (Light) Division, March, 1918), a large Franco-German cemetery North of the village. Urvillers was the scene of fighting in Aug., 1914 and March, 1918. 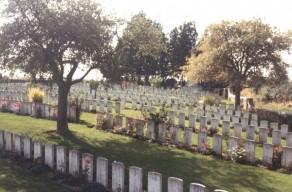 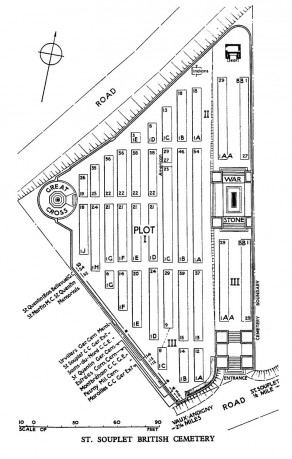