The cemetery lies near the village of Richebourg-l'Avoue which is 9 kilometres north-east of Bethune. From Bethune follow the D.171 toward Armentieres and progress onto the D.166 proceeding into the outskirts of Richebourg. Take a left turning into Rue des Charbonniers for approximately 2 kilometres and the cemetery is on the right hand side.

Richebourg-L'Avoue village remained in British hands from the Autumn of 1914 to the 9th April, 1918, though the front line was within 1.6 kilometres of it. It was recovered in September, 1918. The strong point from which the cemetery was named was in turn named from the hamlet of St. Vaast, between the village of Richebourg-St. Vaast and Goix-Barbee. It stands in an old orchard between two farm buildings, where a trench tramway had its terminus and a Dressing Station was established. It was begun in May, 1915, at the time of the Battle of Festubert, and used by fighting units and Field Ambulances until July, 1917. In April and May, 1918, the Germans buried 90 of their men at the South-East end, and in September and October, 1918, 18 further British dead were buried in Plot V. Eleven Portuguese soldiers buried here in May-July, 1917, have been removed to the Portuguese Military Cemetery. There are now nearly 800, 1914-18 war casualties commemorated in this site. Of these, a small number are unidentified. Special memorials are erected to three soldiers from the United Kingdom, buried in the cemetery, whose graves cannot now be traced. There are 91 German burials here, 34 being unidentified. The cemetery covers an area of 4,080 square metres and is enclosed by a flint wall. 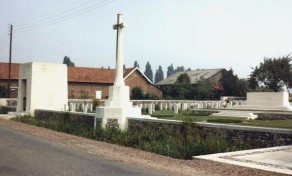