The British Army Service Record for Albert Deacey exists but may be incomplete.

The British Army Pension Record for Albert Deacey exists but may be incomplete. (In this record his next-of-kin is stated as his mother, Mrs Fay, 25, Hannah Street, Blackburn, Lancashire and his address on discharge: 16, Arthur Street, Barnoldswick, York.)

Albert Deacey served in France and Salonica with the Army Service Corps. He transfarred voluntarily to 'D' Coy 9th (Service) Battalion East Lancashire Regiment in Salonica. He contracted malaria and was sent back to England in May 1918 and was discharged on the 8 January 1919. 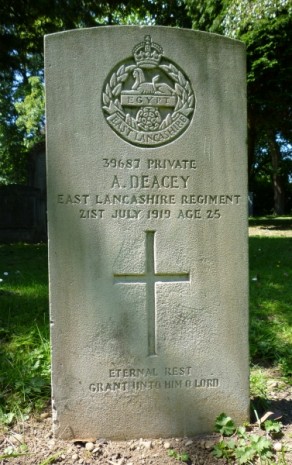