Benjamin Griffiths Haygarth was the son of Robert and Elizabeth Haygarth, née Griffiths and brother of L/Corporal John William Haygarth (2876) (q.v.). Their father was born at Dent, Yorkshire and mother at Acrefair, Denbighshire, Wales. Benjamin and John were cousins of Private Rainforth Pooley (11567) (q.v.).

Benjamin was married to Margaret Morphet in 1916. Margaret was the sister of L/Corporal John Middleton Morphet (2619) (q.v.).

The entry for Benjamin Haygarth is duplicated in the CPGW book on page 367. 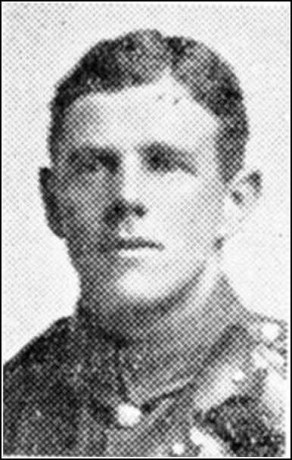 HAYGARTH, Pte. B., R.F.A. – Mr. R. Haygarth, of Dent, has received official intimation that his son, Pte. B. Haygarth, R.F.A., died of pneumonia in India on the 25th of October. He joined the A.V.C. in December, 1915, but was transferred to the R.F.A., and sent to India. He was 27, and leaves a widow, the sister of Pte John Morphet, who was killed in France in August, 1915. Mr. R. Haygarth has now lost two sons in the war. Lance-Corpl. John Haygarth (City of London Regt.), killed in September, 1915, was the first lad to fall who went direct from Dent to the war. 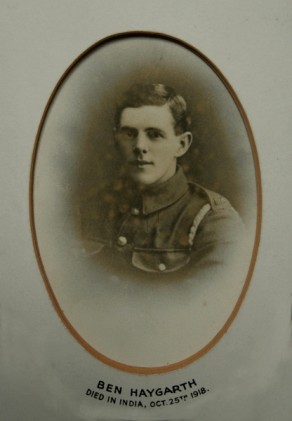 The Cowgill War Working Party have sent Christmas parcels to the men connected with the parish who are serving with the forces at home and abroad. Wm. Mason (Hill Top), W. Booth, B. Haygarth, and C. Thompson have joined the Army Veterinary Corps.

A khaki wedding took place at St. Andrew’s Church on Thursday the 1st inst., when Benjamin Griffiths Haygarth, son of Mr. and Mrs. Robert Haygarth of Dent, was married to Miss Margaret Morphet, daughter of Mr. and Mrs. T. Morphet of Gawthorpe. The bride was given away by her brother, Mr. Anthony Morphet of Barbon. Her two sisters, Misses M. and S. Morphet, acted as bridesmaids. Mr. M.E. Haygarth, brother of the bridegroom, was the best man. The ceremony was conducted by the Rev. E.S. Curwen, vicar. The bridegroom is in the 27th West Lancashire Veterinary Corps, stationed at Preston. A rather singular coincidence is the fact that both bride and bridegroom have lost a brother John in the present war, these two being the only “killed in action” so far recorded in the Dent Roll of Honour.

Mr. R. Haygarth, of Dent, has received official intimation that his son, Private B. Haygarth, R.F.A., died of pneumonia in India on the 5th October. He joined the A.V.C. in December, 1915, but was later transferred to the R.F.A. and sent to India. He would have been 27 years of age on the following day. His younger brother, Lance-Corporal J. Haygarth (City of London Regiment) was the first lad who went direct from the Dale to fall in the war. He leaves a widow, the sister of Private John Morphet, who was killed in the war in August 1915.