Charles Henry Petty was the son of Francis William and Edith Petty, née Whalley. Francis was born at Kildwick and Edith at Bradford, Yorkshire.

Charles is in the photograph of officers in CPGW book (page 44).

Charles is commemorated on the Keighley Golf Club Roll of Honour 1914 - 1919.

A short biography of Charles is included in: ‘A Grammar School at War - The Story of Ermysted’s Grammar School during the Great War’ by Steven Howarth (2007). 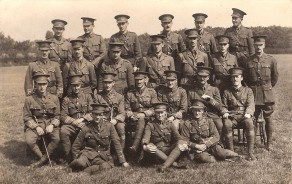 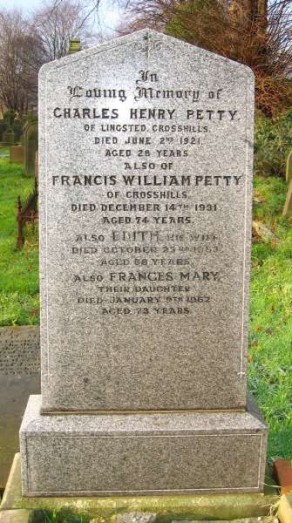 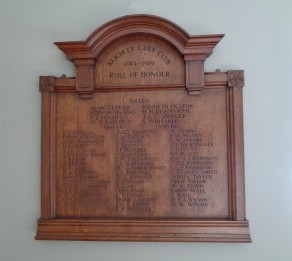 LIEUTENANT HENRY PETTY, eldest son of Mrs. F. W. Petty, of Lingsted, Crosshills, who is with the 6th West Riding Regiment (Territorial) has been wounded in the side by a bullet which ricocheted off a spade.

A concert was held in the Wesleyan Schoolroom on Saturday evening. The Chairman was Lieutenant C. Henry Petty, of Lingsted, Crosshills, who has been wounded while fighting in France. The Rev. Thomas Dargue said Lieut. Petty had been in their thoughts a good deal lately, especially a few weeks ago. He had seen life as many of them were never likely to see it, and he thanked God he was safe and well again. He was certain they would give him a hearty welcome.

Lieutenant Petty said he could not say how pleased he was to be asked to occupy that position. He did not mind saying “Form fours” to soldiers, or greeting a General, but making a speech was rather different. He would like to say how much the men at the Front appreciated the socks and things the ladies at home sent out to them. Perhaps they did not always write letters of appreciation, but it was there, and now that winter was coming on again there was a need of warm clothing for protection against frost bite. A clean pair of socks was the best gift a soldier could receive.

The concert was sustained by Mrs. C. Denby (Cross Roads), soprano; Mrs. H. Ratcliffe (Oxenhope), contralto; Messrs. Arthur J. P. Heaton and F. G. Pedley (Oxenhope), tenors; and Mr. W. Moore (Oxenhope). They provided an excellent programme of songs, duets, trios and quartets. The accompanist was Miss Lena Smith, L.R.A.M., of Bradley. The programme was interspersed with dramatic and humorous recitals by Mr. M. G. Ogden, elocutionist, of Oxenhope. There was a large audience, and the proceeds, which are to provide wool for the making of comforts for the soldiers, amounted to £10 10s.

Above is reproduced a photograph of the late Mr. Charles Henry Petty, son of Mr. and Mrs. F. W. Petty, Lingsted, Crosshills, whose death was announced in the ‘Craven Herald’ last week. Mr. Petty, who was 29 years of age, was in business with his father as a yarn merchant in Bradford, and was an ardent golfer.

At the outset the chairman proposed that a message of condolence be sent to Mr. and Mrs. F. W. Petty on the death of their son, Mr. C. H. Petty. The chairman having referred to Mrs. Petty’s connection with the Sub-Committee and her interest in local education matters, described the late Mr. Petty as “a most lovable lad,” who served his country in the greatest crisis it has ever known. No doubt his early death was precipitated by the wounds he received in the war. Mr. Thomas seconded the resolution, which was carried by the members rising in their places.