Dawson Parkinson was the son of John and Sarah Ellen Parkinson, née Chew and brother of Private Randolph Riley Parkinson (28823) (q.v.). Their father was born at Bolton-by-Bowland and mother at Newsholme near Gisburn, Yorkshire. Dawson and Randolph were cousins of Private Arthur Bleazard (11189) (q.v.) and brothers-in-law of Private Samuel Hayhurst (Pinder) (38239) (q.v.).

Dawson was married to Alice Ann Life in 1905.

The British Army Service Record for Dawson Parkinson exists but may be incomplete. 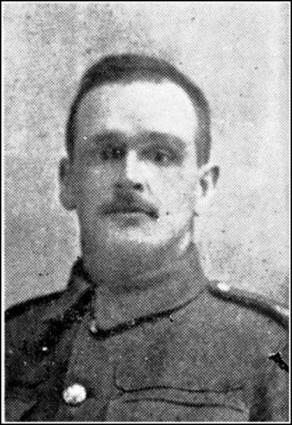 We have previously recorded the fact that Private Dawson Parkinson and Samuel Hayhurst (Pinder), of Bolton-by-Bowland, were officially reported as having been missing since May 3rd and, last Saturday morning, Mr. and Mrs. Brotherton, Brookside Cottages, received word that their third son, Private Ben Brotherton, 2nd/6th Duke of Wellington’s West Riding Regiment, was missed on the same date. He was 25 years of age, and joined up in the 22nd March, last year. The last letter received from him was dated the 29th April. – Private Parkinsom was 38 years old, and lived with his wife and two children at Nook Cottage. He was also in the Duke of Wellington’s, and became a soldier on the 12th August last, going to France on the 9th January. Before joining, he was a gardener at Bolton Hall. Private Hayhurst joined the West Yorkshire Regiment on the 23rd October last, and had been in France six months. He was 36 years of age.

The very unwelcome news has been received by the relatives of Pte. Samuel Pinder, of Holden; Pte. Dawson Parkinson, of Nook Cottage; and Pte. Ben Brotherton, of Bolton, that these soldiers are missing.

Mrs. Parkinson, wife of Pte. Dawson Parkinson, received a letter last Monday from her husband stating that he was a prisoner of war in Germany.

On Saturday morning Mrs. Dawson Parkinson received the sad news that her husband, Pte. Dawson Parkinson, of Nook Cottage, had died whilst a prisoner of war in Germany. Deceased enlisted on the 12th of August, 1916, in the Duke of Wellington’s, and went out to France on January 9th, 1917. Unluckily he was taken prisoner on the 3rd of May. He was 38 years of age, and leaves a wife and two children, for whom the greatest sympathy is felt. A memorial service will be held at the Parish Church on Sunday next.

The village is very indignant indeed at the treatment meted out by Germany to Private Parkinson, their adopted prisoner of war, whose death took place on December 22nd 1917. Though living at Bolton-by-Bowland of late years, Private Parkinson was an old resident of Gisburn, and was adopted by the villagers at the request of the ‘Halifax Guardian’ Committee who have charge of all prisoners from the ----- Duke of Wellington’s Regiment. He was captured at ----- in May last, and when in August the Gisburn Knitting Guild found that their small weekly collections among themselves for British prisoners of war had reached over £4, they sent it to Halifax to buy parcels for Private Parkinson, as being the nearest local prisoner of war. Their previous contributions had gone to Private Leeson of Clitheroe, who also met a horrible fate at the hands of the Germans. In acknowledging the money the Halifax people asked Gisburn to make itself responsible for £2 7s. per month for parcels to Private Parkinson, and this being more than the Knitting Guild could undertake themselves the scheme was widened, and almost every house gave a small sum weekly. Private Parkinson’s relatives and friends also helped, but in spite of the fact that splendid parcels have been sent every five days direct under the Red Cross seal, the poor man has not received one. A complete outfit of clothing was sent in September by the appointed Government Committee, yet pitiful letters asking for clothing have never ceased to arrive from him. Of all correspondence sent by relations and friends he saw nothing. He had been moved from place to place in a most puzzling manner. A postcard written the week before his death asked for food and he said “thirteen of us to two loaves”.

He also said he had been moved again – this time a five days’ journey in a train without getting out. Two days later another postcard announced a further change of address. What his state of mind must have been at the supposed neglect of everyone in England can only be imagined, and there is no doubt that he has been starved to death while someone has deliberately stolen or kept back the good parcels that would have kept him alive.

A public meeting was held in the Parish Room on Tuesday evening to discuss the matter, the Vicar presiding. It was decided to adopt another man, and the secretary (Miss Pye) was instructed to write to Halifax for the name of the nearest prisoner of war.

The prisoner of war newly adopted by the village in place of Private Dawson Parkinson, is Private John Preston, of the Duke of Wellington’s Regiment, who is now in camp at Gristrow, in Mecklerbuns, Germany, and whose home is in Caton, near Lancaster…

On Saturday morning last Mr. J. W. Wilkinson, of the Coach and Horses Hotel, received word that his eldest brother, Corporal H. T. Wilkinson, was missing, supposed drowned on December 30th, and that word to that effect had been received from the Headquarters of the Army Service Corps. Private Wilkinson joined the A.S.C. soon after the outbreak of war and had his first leave last October. He returned for Alexandria at the end of November, and was probably, unfortunately, on the ‘Aragon’. Corporal Wilkinson was a very popular lad and many friends will be very sorry at the sad news. He leaves a widow and one child, and was 36 years of age.

A memorial service was held in the Bolton-by-Bowland Church on Sunday morning for Corporal H. T. Wilkinson and Private Dawson Parkinson. The Rector, in referring to the loss said:– “Death, after all, is the common lot of everyone, but to each one death is the entrance into a newer fuller life. The sadness is not the death, but the incompleteness and unsatisfactoriness of our lives. God meant each life to be perfect, therefore He must have some method of completing elsewhere that which is imperfect here. So we shall leave that which is imperfect to enter that which is perfect, and to those who realise what death really means; the entrance into possession, into fuller powers, and wider life, is but the lifting of a latch which opens the door into the bright light beyond. This is what those of whom we are thinking today are experiencing. They both fought for their country – one became a prisoner of war, with all its hardships, the other lost his life on a transport. Now they are at rest.”

The Dead March was then played by the organist.

Mrs. Dawson Parkinson writes to thank the people of Gisburn for their kindness, which she will never forget, to her husband, the late prisoner of war of the village and regretting that he never had the comfort of knowing all that was done for him.

PARKINSON – In loving memory of Pte. Dawson Parkinson, who died a prisoner of war at Althdam, Germany, December 22nd, 1917.

We loved him, oh no tongue can tell
How much we loved him, or how well;
He fought the fight, the victory won,
We weep, but say God’s will be done.

From his loving Wife and Children, Nook Cottage, Bolton- by-Bowland.

PARKINSON – In loving memory of Pte. Dawson Parkinson, who died a prisoner of war in Germany, December 22nd, 1917.

‘Tis sweet to know we’ll meet again
When partings are no more;
And that the ones we loved so well
Have only gone before.

From his Brothers and Sisters.

PRISONER OF WAR – The prisoner of war newly adopted by the village in place of Pte. Parkinson is Pte. John Preston, of the Duke of Wellington’s Regiment, who is now in camp at Gustnow in Mecklerburs, Germany, and whose home is in Caton, near Lancaster. The sum of £2 13s. has been sent to Halifax for the month’s parcels for him, and it is hoped to hear very noon that they are being safely received. The balance sheet of the fund from September, 1917, when the Knitting Guild’s first gift of £4 was sent to Halifax for Pte. Parkinson, to Jan. 31st, 1918, shows the receipts to have been £22 14s. 11d., and the expenditure £19 18s. 2½d., leaving a balance in hand of £4 16s. 8½d.

PRISONER OF WAR – Further particulars are to hand of the prisoner of war recently adopted by the village. Pte. Preston is 26 years of age, single, and an employee of the Bobbin Works Company, of Caton, near Lancaster, where he lived with his parents at Brook House. He showed himself of the right stuff by volunteering in the very early days of the war, and was captured at Vimy Ridge in May of last year after two and a half years with the colours. An elder brother was killed on October 4th, 1917, and a younger brother is serving with the King’s Own Lancasters. Pte. Preston bears an excellent character among his fellow-workers, who speak highly of him as a teetotaller and a constant member of the village church choir and a bell ringer. – Mrs. Dawson Parkinson writes thanking the people of Gisburn for their kindness – kindness which she says she will never forget – to her husband, the late prisoner of war of the village, and regretting that he never had the comfort of knowing all that was done for him.