Frederick Baldwin (born 7 June 1895) was the son of Dixon and Jane Baldwin, née Cox. Dixon was born at Settle, Yorkshire and Jane at Hazelwood near Duffield, Derbyshire. 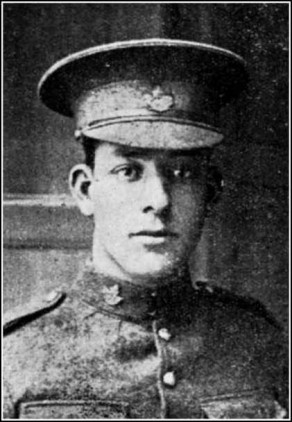 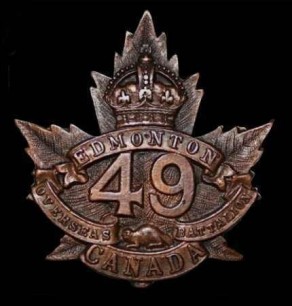 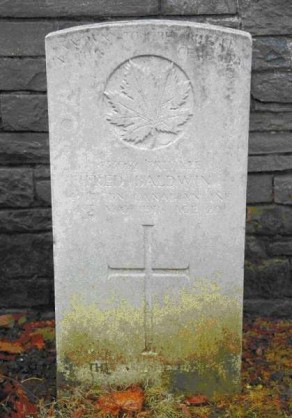 CWGC Headstone - [Personal inscription: ‘THY WILL BE DONE’] 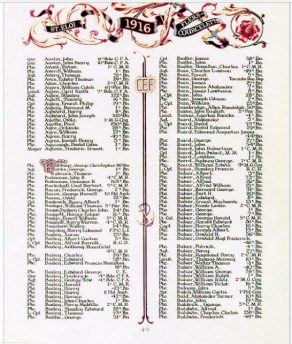 Fred Baldwin, son of Dixon and Mrs. Baldwin, who left Settle 10 or 11 years ago and emigrated to Canada, has been killed in recent fighting. He enlisted in December, 1914, and came across from Canada with the first Canadian Expeditionary Force, and saw some very hard fighting. The Company's Major, writing to his parents, said that their son died like a man, and they had every reason to be proud of him. The deceased was the grandson of Mr. Joshua Cox, of Upper Settle, and he has many relatives in Settle and District.

Ever remembered by Nelly and Joss, High Croft, Settle

BALDWIN - In ever loving remembrance of Fred Baldwin, Canadian Forces, who was killed in action in Belgium, May 2nd, 1916.

We often sit and think of him,
But not with outward show,
For the heart that mourns sincerely
Mourns silently and low.

Ever remembered by his Father, Mother, Brothers and Sister Lily, Alberta, Canada.

Fred Baldwin, son of Mr. Dixon and Mrs. Baldwin, who left Settle ten or eleven years ago and emigrated to Canada, has been killed in the recent fighting. He enlisted in December 1914, and came across from Canada with the first Canadian Expeditionary Force, and saw some very hard fighting. The lad's Major, in writing to his parents, said that their son had died like a man, and they had every reason to be proud of him. The deceased was the grandson of Mr. Joshua Cox, of Upper Settle, and he has many relatives in Settle and district.

With dearest remembrance of Pte. Fred Baldwin, of the 49th Batt. Canadian E.F., who was killed in action May 2nd, 1916.

"Flowers fade, but the memory of a dear friend Never."

"He answered the call, and is now at rest in a land where there is everlasting peace."

A memorial service for the Settle soldiers who have fallen in the war was held at the Parish Church last Sunday afternoon. There was a large congregation, and the service was conducted by Rev. W. E. Linney (vicar). The hymns 'God of the living in Whose eyes,' 'Jesus lives,' 'On the resurrection morn,' and ' O God our help in aged past' were sung, and the 'Last Post' was sounded at the close of the service by two of the local Cadets. The organist (Mr. F. Lord) also played appropriate music as the congregation assembled and left the church.

The Vicar, in the course of his sermon, said they were met to remember the Settle soldiers, men, and boys - some indeed little more than boys - who had laid down their lives for the country at the war, whether during the year which was just drawing to a close or in the earlier stages of the conflict. When he asked them to remember those heroes that day, he knew that he was asking them to do what they were always doing. They were their own dear ones united to many of them by ties of blood - husbands, fathers, brothers, sons, as well as friends. How could they forget them? Were they not reminded of them day by day by the gaps in their home circles, which could never again be filled by them? They all desired in their hearts that God would bless and keep them, and give them peace. and happiness. The Vicar then read the following list of the Settle men who had laid down their lives:- John Edward Bell, Geo. S. Belles, Fredk. Baldwin, John Barrett, Robert Bateson, William Bradley, Frank Bulcock, George R. Bullock, Herbert Clark, John Cokell, Edward Ellershaw, Jas. Ewart, Wm. Ewart, Fredk. Frost, Harold Goss, Alfred Gower, Joseph Lord, John Morphet, John Packard, Chas. Peachey, Thomas Howarth Preston, Albert Ralph, Thos. Stackhouse, George Edward Turner, Derwent Turnbull, Wm. Troughton, Harry Walton, John Edward Wilson, Ernest Wooff, and Robert Wooff. Proceeding, the Vicar said they had a responsibility with regard to those men. They owed them a debt, and he trusted and believed that they were wishful to do all that they could to repay it. " Our lives are being saved by their death. If we have any future before us on the earth it is because they gave up their futures to secure it. Their right to survive was as good as our own. Many of them would have been of far more use in the world than we can hope to be. The future stands to be only poorer for our surviving in their stead. We are debtors to them for all they have given us. To the future think of all it has lost in them." How were they going to pay the debt, and in paying it to honour their heroic dead? Surely there could be but one answer - to live to give effect to their ideals. When they were asked what those ideals were, they might be well put in the words of Bishop Walshaw How's hymn written for the diamond jubilee of Queen Victoria, "To make the world a better world for man's brief earthly dwelling." If Prussian militarism should gain the ascendancy the world would be scarcely a fit place to live in. What they wanted was the triumph of right and liberty. That was the task they had begun, and many of them, fired by the enthusiasm of a noble cause, literally went singing to their death. The old life which had no loftier aim than a high standard of material comfort had been felt to be unsatisfactory. To ardent youth the higher spirit of self-sacrifice, which was the spirit of Christ, beckoned onward with irresistible attractiveness, and they followed the gleam. They had yet to complete the great task to which they dedicated themselves. That was the way they could honour the memory of their fallen heroes, and with confidence that they had not died in vain.