Frederick Ward was the son of Thomas and Sarah Alice Ward (née -). Thomas was born at Barden near Bolton Abbey and Sarah at Halifax, Yorkshire.

Frederick is commemorated in the 'City of Bradford Great War 1914-1918 Roll of Honour'. 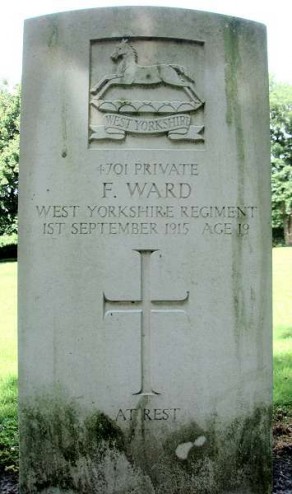 On Monday afternoon, Pte. Joseph Shaw, of the 3/6th Battalion Duke of Wellington's West Riding Regiment, who died on Thursday last week at the Skipton and District Hospital from pneumonia, was interred at Waltonwrays Cemetery with full Military honours. Deceased was 38 years of age, a widower with three children, and a native of Lancashire, having formerly resided in the neighbourhood of Blackburn. He is said to have previously served in the East Lancashire Regiment and to have seen service in the South African War. He spent some days in hospital prior to his death, news of which was received with much regret by his comrades among whom he was very popular.

The cortege left the Hospital shortly after 2-30. The coffin, covered with the Union Jack, was preceded by a firing party with arms reversed, under Sergt. Raine; the Battalion Band, in charge of Band Master Ramplin; and the Rev. A. T. Walkden, curate of Skipton Parish Church. Behind came drafts of men from A, B and C Companies. The officers present were Capt. Brewin, Adjut. and Second Lieuts. Ingham and Willink, with Sergt. Major May. As the procession passed along Water Street, High Street and Keighley Road, the Band played the Dead March in Saul, and nearing the Cemetery gave an impressive interpretation of Chopin's Funeral March. At the Cemetery gates the Band lined the road and the cortege passed between. None of the deceased man's relatives were present, but a large number of the general public attended the service in the Church, while at the graveside the men of the Battalion stood bareheaded and at attention while the last rites were performed. The firing of two volleys over the grave and the sounding of the ‘Last Post’ brought to a close an impressive and touching ceremony. Floral tributes were sent by the family, and the officers and men of the Battalion.

The death also took place on Wednesday week of Pte. Frederick Ward, of the 3rd 6th West Yorkshire's encamped in the Raikes Hutment. Pte. Ward had suffered from pneumonia and was removed to the Skipton and District Hospital for treatment. Deceased, who leaves a widowed mother, was taken to Bradford for interment on Saturday, the Band of the 3rd 6th West Ridings according military honours to Skipton Station.