George Ashton was the son of John William and Susannah Ashton, née Sedgwick. John was born at Draughton and Susannah at Scosthrop, Yorkshire.

George is commemorated in the 'City of Bradford Great War 1914-1918 Roll of Honour'.

The image of the Northumberland Fusiliers cap badge also shows the collar badge of the Tyneside Irish battalions. 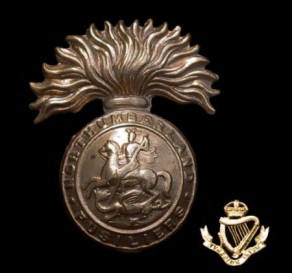 He volunteered in November 1915, and three months later embarked for France. In this theatre of war he took part in the fighting at Ypres and on the Somme. He died gloriously on the field of battle at Arras on April 9th, 1917, and was entitled to the General Service and Victory Medals.

"Thinking that remembrance, though unspoken, may reach him where he sleeps."

[Two of George Ashton's brothers are also listed on the same page, both of whom survived the war.]