George Hitchen was the son of George and Eliza Hitchen, née Bradley. George, senior, was born at Grindleton and Eliza at Slaidburn, Yorkshire.

George was married to Mary Alice Cowperthwaite in 1899.

In 1901 George's wife, Mary, and their 1 year old son were living at 44, Whalley Road with her parents, Doctor John and Elizabeth Cowperthwaite.

George and his brother Fred are commemorated on the Clitheroe War Memorial. 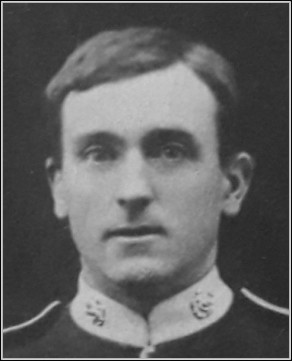 News has reached Mrs. G. Hitchen, of 3, Park-street, that her husband has been killed in France. He was Private George Hitchen, of the 1st East Lancashire Regiment. He went through the South African War without receiving a scratch, and he has been with the Expeditionary Force since September, in the very thick of the fighting, without being wounded. Thirty-six years of age he leaves a widow and two children.

The news of his death was sent by his brother, James, of the same regiment, who writing on March 17th, says his brother was killed by shell fire the previous Sunday (March 13th).

Writing last Saturday, he includes letters taken from his brother’s pockets and the medal ribbon from his tunic. He adds: I had forgotten in my last letter to tell you how he was killed. Well, we had come out of the firing line after the battle of Neuve Chapelle for a day’s rest. They were shelling our resting place, and a shell burst overhead killing 29 and wounding 18. George being one of the unfortunate ones. I know where he is buried and am trying to have a stone put over his grave.

Deceased was one of four brothers in the army. He and two others were in the East Lancashire Regiment, James having come over from Australia to take part in the war. The other, Wilfred, is in hospital at Southampton with frost bite. The remaining brother is Private Fred Hitchen, who is at the remount depot at Ormskirk, expecting to leave for France shortly. Deep sympathy will go out to the relatives of the deceased soldier.

In Loving Memory of Private George Hitchen, who was killed in action at Neuve Chapelle, March 14th, 1915.

We mourn for him in silence,
But with no outward show;
For the heart that mourns sincerely
Beats silently and low.
We shall meet him some bright morning
Resting by the waters fair;
He is waiting for our coming,
In the upper garden there.

–From his Loving Wife and Children, George and Lizzie. 8, Whalley road.

In Loving Memory of Private George Hitchen, who was killed at Neuve Chapelle, March 14th, 1915.

–From his Sister and Brother-in-Law. 6, Monk street.

After surviving the Battle of Neuve Chapelle, 10th – 13th March 1915, George Hitchen was killed on 14 March, when a heavy shell burst in the middle of ‘D’ Company at Rouge Croix. 24 other ranks were killed and 1 officer and 37 other ranks wounded by this shell. The officer and 11 other ranks died of their wounds. 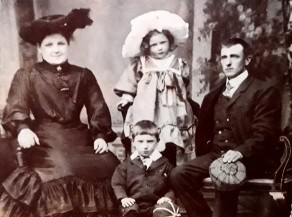 George and Mary Alice Hitchen and their children, George and Elizabeth 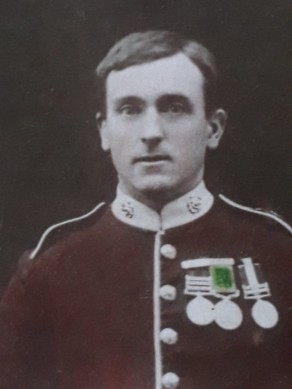 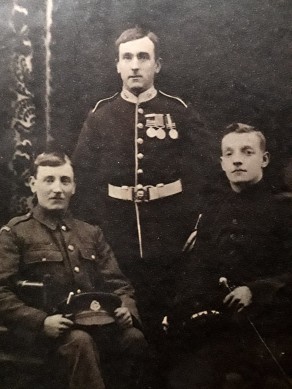 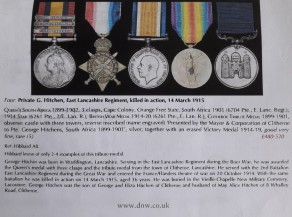 Page from a catalogue of Dix Noonan Web (Specialist Auctioneers) 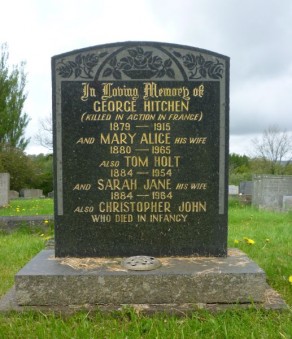 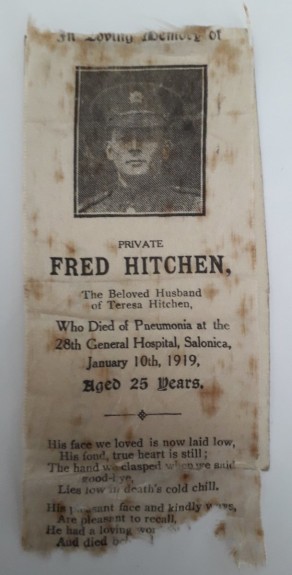 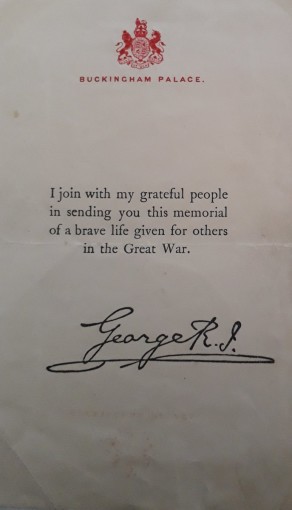 Bestowal document with King's message accompanying the next of kin Memorial Plaque for Private Fred Hitchen, the brother of Private George Hitchen