Gordon Sanderson was the son of William and Alice Maud Sanderson, née Watson. William was born at Great Ayton and Alice at York, Yorkshire.

Gordon was married to Agnes Robertson Cowie in 1909. 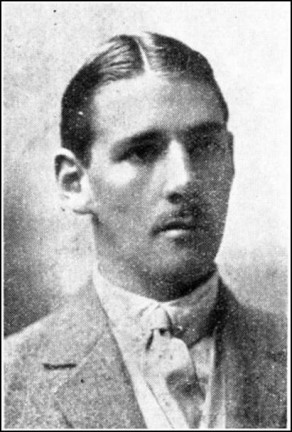 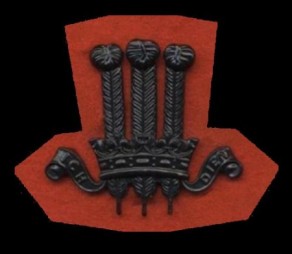 Additional Information: Son of William Sanderson, of Field House, Settle, Yorks; husband of Agnes R. Sanderson, of 2, Mentone Gardens, Edinburgh. Public Works Dept, Egypt, and the Archaeological Survey of India. (CWGC Headstone Personal Inscription: HE PASSED OVER AND THE TRUMPETS SOUNDED FOR HIM ON THE OTHER SIDE) 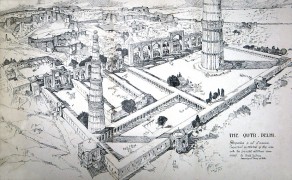 Line-drawing of the Qutb Mosque, Delhi, India. A bird’s-eye perspective of the Qutb complex drawn by Gordon Sanderson, A.S.I. Conjectural restoration of the area with projected additions if completed 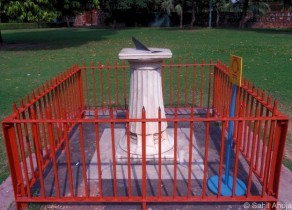 From the website: Pixelated Memories - courtesy of Sahil Ahuja 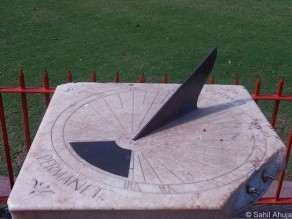 From the website: Pixelated Memories - courtesy of Sahil Ahuja

A SETTLE OFFICER’S DEATH IN ACTION

News has been received at Settle of the death of Lieutenant Gordon Sanderson, the only son of Mr. William Sanderson, of Rathmell, Settle, who was killed in action in France. The deceased officer, who was 28 years of age, was a man of fine physique, standing over 6ft 4in. On the outbreak of war he was offered an A.D.C. appointment, but this he refused, and instead took charge of the machine gun section of the 2nd Gurkhas.

In one of his latest letters from the Front he said that many of his friends were knocked out and also that “more men” were wanted.

Lieutenant Sanderson was a clever architectural draughtsman, being formerly engaged on Government work in Egypt. He subsequently worked in Edinburgh, and later was appointed Superintendent of the Archaeological Survey of the North-West Provinces of India. On the occasion of the Queen’s visit to India he had the honour of showing her Majesty over some of the temples round Agra. Prior to going to India Lieut. Sanderson was married to Miss Cowie, daughter of the late Mr. A. Cowie, of Mentone Gardens, Edinburgh, and he leaves a baby daughter born only two weeks ago.

The following paragraph appeared recently in the Indian newspaper ‘The Pioneer’, with reference to the late Mr. Gordon Sanderson, whose parents reside at Rathmell, and who was killed at the Front in October 1915:–

“Referring to the death with his regiment in France of Mr. Gordon Sanderson, superintendent of Mahomedan and British monuments, Northern Circle, the Delhi administration report says:– It is difficult to exaggerate the loss which archaeology at Delhi has suffered by his death. Most of the more important monuments at Delhi and every branch of archaeological work, the Delhi Museum, and the literature and epigraphy of the Delhi remains offer an eloquent testimony to the energy, enthusiasm, research and taste which he brought to bear on the conservation and history of buildings at Delhi.”

We (the ‘Craven Herald’) are informed that it is intended to erect a memorial to Mr. Gordon Sanderson in the district where much of his work was done.

The members of the Archaeological Survey of India (under Sir John Marshall, the Director) have erected in the neighbourhood of Delhi, The Qutb, a memorial to Gordon Sanderson, who for some years was Superintendent of the Survey in the United Provinces, and, who, having joined the Indian Army at the outbreak of the War, was killed in France in 1915. The memorial consists of a white marble sundial, with the name and date of death, and with the inscription:– “Transit umbra; lux permenet.” – Whilst residing at Rathmell, Mr. Sanderson wrote and illustrated a book on the architecture of Settle and district.

RATHMELL OFFICER’S DEATH AT THE FRONT

Lieutenant Gordon Sanderson, whose death was reported as having occurred in the trenches on the 13th inst. in France, was the son of Mr. Wm. Sanderson of Rathmell, an ex-alderman and Justice of the Peace for the Borough of Scarborough. Shortly after the present war broke out Lieut. Sanderson expressed a wish to give up his appointment as superintendent of the Archaeological Survey, North West Province of India, and to become a soldier. After a short delay, his chief, Sir H. Marshall, gave the requisite permission, and he joined the Gurkha Regiment stationed at Dehra Dun. His previous experience as a member of the Agra Rifles was of value to him, as he had lieutenant’s rank in that force. More than one opportunity had been given him of taking a less hazardous part in the war, but his wish was to be at the front, and after his arrival in Europe he paid a short visit to his parents in Rathmell. In one of his latest letters from the front he said that many of his friends were knocked out, and also that more men were wanted. He had charge of the machine gun section of the 2nd Gurkhas. In his civil capacity, apart from the important and heavy work of his department under the Indian Government, he wrote much for the Press, lectured at educational centres in India, and supplied drawings to English magazines, notably to ‘The Builder’. His commanding height gave him a great advantage in athletics. He was 28 years of age, and leaves a widow and infant daughter.