Harold Colley (born 3 March 1891) was the son of William Henry and Harriet Colley, née Pulleyn. William was born at Bradford and Harriet at Goldsdborough, Yorkshire.

Harold is commemorated in the 'City of Bradford Great War 1914-1918 Roll of Honour' and on the Hanson Higher Grade Council School War Memorial, Bradford.

A short biography of Harold is included in: ‘A Grammar School at War - The Story of Ermysted’s Grammar School during the Great War’ by Steven Howarth (2007). 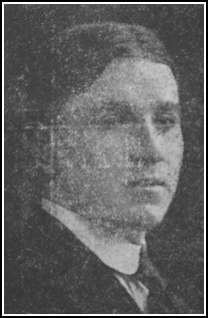 COLLEY Harold of 879 Moor Park-terrace Bradford a second-lieutenant in the West Yorkshire regiment died on or since 1 July 1916 in France Probate Wakefield 12 May to William Henry Colley company secretary. Effects £195 18s. 9d.

Second-Lieutenant Harold Colley, West Yorkshire Regiment, who was a few years ago an assistant master at the Skipton Grammar School, has, it is feared, perished in the recent advance on the Western Front.

The Corporal (now wounded and in hospital) who assumed command when Lieut. Colley fell and apparently was the last person to speak to him, thus writes to the parents of Lieut. Colley at Bradford:– “On the glorious 1st of July, which I shall never forget, your son was next to me when he gave the command ‘Ready, boys; up the ladder and over the trench like one man.’ We all had our eyes on him, for he was our leader. We got about 200 or 300 yards when, I am sorry to say, he fell only a yard from me, and the last I saw and heard of him was while he lay on the ground. He shouted in the midst of a hellish fire, shouted ‘Onward, McLaughlin! Good-bye and good luck!’ My God! these words spurred us on, in spite of the heavy fire from machine and artillery, to do or die; teeth set, eyes straight in front of us–rifle firmly held–on we went. Those words from your dear son inspired us.”

Lieutenant Colley’s Captain (who is also wounded) writes:– “If you have further news I should be glad to have it, as your son was in my company always, and we all were very proud of his courage and absolute coolness on many occasions in France. He was many times over the ‘lid’ on dangerous night work–wiring, or patrol work–never excited, always cool and smiling over it. His platoon, and, in fact, every man in the company, would have gone anywhere with him, as they had such confidence in him. Our Colonel (who was killed in the same action) I know had great faith in him, and only a few days before he went over repeated to me the high opinion in which he held him, and in which we all shared in the ‘D’ Company, knowing him so well.”

The new Commanding Officer of the battalion writes:– “I enclose report about your son, which is the best evidence procurable. Unless he is home by now (and we have no information from the base that he has passed through wounded) I fear you must accept the worst. Believe me, he died gallantly and in a fine cause, and was a perfectly splendid officer, with all the dash and gallantry in the trenches which are so needed in these days. He had just been specially selected intelligence officer for the regiment, and was getting along very well. What the officers, non-commissioned officers, and men of the – did on that day will never be forgotten, and your boy is one of those who have helped to make history and the foundation of the tradition for the – West Yorkshires. I fear sympathy from a stranger as myself is of poor solace to you and his mother. I will conclude, but, believe me, the battalion has lost a great friend, a gallant soldier, and a fine gentleman.”
The Adjutant’s report states that no man in the company actually saw Lieutenant Colley dead. The stretcher-bearers had not seen him. Several men report that he was first wounded by a bullet in the mouth. Two men stated that they lifted Lieutenant Colley off the ‘lid’ into the first-line trench. He was badly wounded by shrapnel in the back, and in their opinion was dying fast, and they thought the wound had reached his lungs. He was not afterwards seen. The R.A.M.C. men may have brought him in, or he may have been buried in the frontline trench, which was flattened out.

One of the observers writes from hospital:– “I was under Lieutenant Colley as observer… He took three of us up to the trenches previous to the attack, and was just in time to bandage up five chaps who were wounded by a shell. Although we were expecting some more over he stayed with them till they were moved, and made us clear away.”