James Leeming was the son of Joshua and Ann Leeming, née Hargreaves and 1st cousin once removed of Private John Thomas Leeming (18904) (q.v.). James's father was born at Newton-in-Bowland and mother at Slaidburn, Yorkshire.

The British Army Service Record for James Leeming exists but may be incomplete.

James is commemorated on the Downham and Twiston War Memorial in St Leonard's Church, Downham.

TWISTON SOLDIERS LAY DOWN THEIR LIVES

Last week-end news reached Twiston of the death of Pioneer James Leeming, who had lived with his sister at Ings End. When the call was made, last December, for men experienced in road-making to go to France for service on the roads there, deceased responded along with other employees of the Bowland Council, in whose employ he had been at Gisburne for over twenty years. He joined the Roads Batt. of the R.E.’s on the 18th December, and arrived in France a month later. Death was due to cerebro-spinal meningitis, and occurred on the 8th inst. Deceased who was 45 years of age, and a widower, leaves three children.

Another Twiston soldier, Private Edward T. Hudson, King’s Own Royal Lancaster Regt., has also been reported killed on June 6th. Thirty-six years of age, he was married and enlisted on January 6th. Prior to joining up, he worked at Blackburn, but was formerly an insurance agent at Colne and Nelson. A member of an old Barnoldswick family, he had lived in the Twiston district for several years. 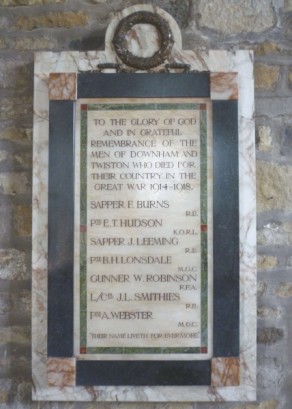 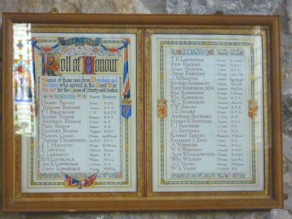 Pioneer John Polley, of the Road Construction Corps, is home on a first leave from France this week. Belonging to the Non-Combatant branch of the Corps, men over military age, he works some distance behind the lines, where the chief danger is from stray shells when Fritz is strafing harder than usual. Consequently, unlike the rifle-and bayonet-equipped younger pioneers working nearer the lines, his pick and shovel are his only weapons of defence should an unlikely surprise-break-through occur. When Pioneer Polley went out a year ago his companion was poor ‘Jim’ Leeming, his assistant for many years on the County Council road-engine working under Mr. Burrow, but they were soon separated, ‘spotted fever’ claiming ‘Jim’ as a victim before he had been out many weeks.