John is commemorated on the Wanborough Parish War Memorial. 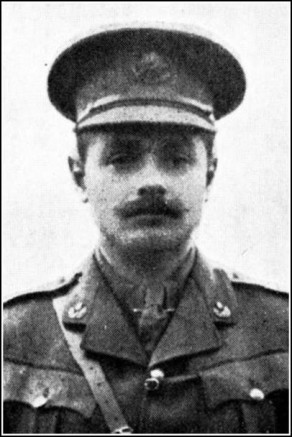 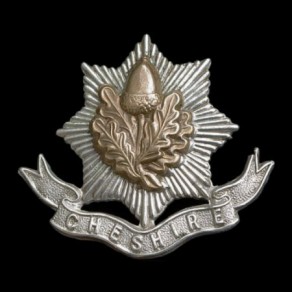 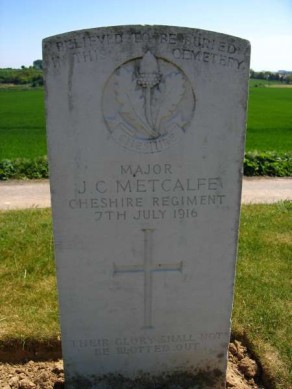 News has been received of the death of Major John Chayter Metcalfe, Cheshire Regiment, who was killed in action on July 3rd. The deceased officer, who was 31 years of age, was the only son of the late Major John Augustus Metcalfe, of Ings House, Hawes, and resided at King Edward’s Place Wanborough in Wiltshire. He served with the 3rd West Yorkshires during the Boer War, where he was for some time temporary aide-de-camp to the late Lord Cloughton. He afterwards received a commission in the 13th Hussars. He left the Army in 1906 and took up racing and was a successful amateur Steeplechase rider, and breeder of thoroughbred horses. When the war commenced he enlisted in the Public Schools Corps, and in October 1914 received a captaincy in the Cheshire Regiment, and in September, 1915, was gazetted temporary Major. He was one of the biggest landowners around Hawes. His grandfather, who resided at Ings House, Hawes, was Chaplain to the Duke of Wellington and his uncle, the late Dr. Parker, was for many years vicar of Hawes.

Mr. T. Metcalfe, uncle of the deceased officer, has received the following letters of condolence.

The Lieut.-Col. of his regiment writes:– “I hasten to send my deepest sympathy on the death of your nephew. He did useful work in command of a company and his loss is one that the regiment can ill afford. He died gallantly leading his men in an attack on the German trenches. A higher eulogy no British officer would ask or desire.”

The Major commanding his Battalion writes:– “It is with the deepest regret that I have to tell you of the death of your nephew, Major. J. C. Metcalfe, killed in action on the 3rd, gallantly leading his men in our attack on the German trenches. Being one of the first to join the Battalion on its mobilisation, his loss to us is deeply felt, and the officers and men join me in the expressions of sympathy on your bereavement.”

A letter from the Chaplain reads:–“I am writing to express my great sympathy with you on the loss of your nephew. I have only been a short time with the Battalion but long enough to know what a splendid fellow he was. He had won the regard of all his brother officers, and the confidence of his men. The blow must be very heavy to bear, but it will be a consolation to know that he died for his country, leading his men. My heart goes out to you in your sorrow.”

The Christmas of 1916 was the quietest experienced in living history, and many causes contributed to this end. The weather, which was cold, with alternate showers of snow and rain, did not make for cheerfulness and the day was spent for the most part either at home, or (in the case of the men folk), in the clubs. No parties of Christmas singers were abroad on Christmas Eve, or on Saturday night, and no band enlivened matters on Christmas Day. The usual services were held in St. Margaret’s Church, and these were fairly well attended, about 60 partaking of Holy Communion. It was Christmas under war conditions, and which have touched almost every home. Many well-known men have made the great sacrifice. On the Hawes roll of honour are recorded the following names of those fallen in battle:–2nd Lieut. G. Bargh, Pte. James Banks, Pte. Fred Cockett, 2nd Lieut. J.W. Fryer, Pte. John Fawcett, Gunner Albert Leach, Major J.C. Metcalfe, Pte. R. Milburn, Pte. S.Moore, Pte. L. Staveley, and Corporal Tom Walton.