John Henry Pool (born 31 May 1884) was the son of John and Harriet Pool, née Wilkinson. Harriet was born at Liverpool, Lancashire.

John was married to Emily Machin in 1912.

Entry for the marriage of John Henry Pool to Emily Machin, 1 June 1912 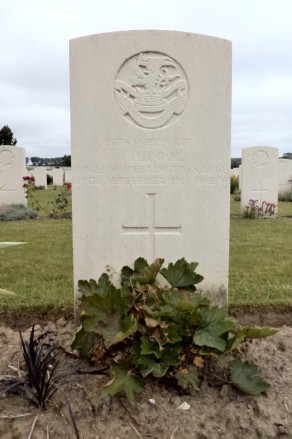 HOW PRIVATE RISHWORTH, OF SILSDEN, WAS WOUNDED

Writing home from a hospital in Boulogne, Private Thomas Dudley Walker, 9th West Riding Regiment, eldest son of Mr. J.W. Walker, Ilkley, relates how Private J.H. Pool, of Ilkley, was killed in France, and himself and other men belonging to Ilkley, Silsden and Bolton Abbey were wounded. He says:– “We went into the trenches on Tuesday night, September 28th. It rained all night. I was on sentry behind the parapet, being relieved after an hour’s duty by Private Pool. At 5 a.m. I was taken away on fatigue until 8 a.m., at which time Private Pool was also taken off duty. Our chaps had been bombing the enemy all night, and they began to drop bombs into our lines. As we were preparing our breakfasts one landed into soft earth ten yards away from us. It wounded one man on the head and another on the leg, put two fires out, and covered us with mud. While we were helping the two men to bandage the wounds, grenades were falling well over our trench, so we again commenced to prepare breakfast.

“I had just given one of the wounded men my bacon, which I had cooked, and Private Pool had given him his own tea and was also giving him some bread, when another grenade dropped into the trench. Private Pool was killed instantaneously, and Private Roberts, from Bolton Abbey, was wounded in six places. His left thumb and one of his fingers were cut off. Private Albert Rishworth, of Silsden, myself and two new lads were also wounded.” Private Rishworth is now in hospital at Lincoln nursing several wounds which he sustained by the hand grenade referred to by Private Walker.