John Henry Ruecroft was the son of William and Isabella Ruecroft, née Fowler. William was born at Carperby and Isabella at Castle Bolton, Yorkshire. Isabella died in 1895.

The British Army Pension Record for John Henry Ruecroft exists but may be incomplete. 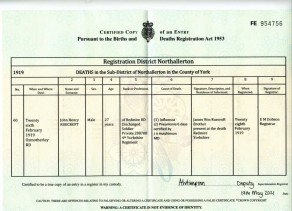