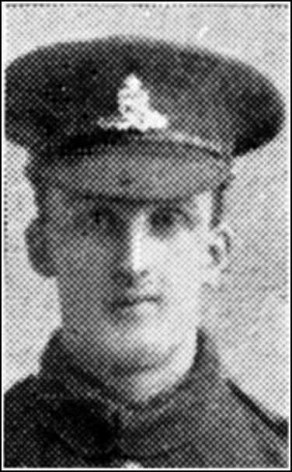 The death is reported of Private John (Jackie) Metcalfe, R.F.A., Hawes. He volunteered in October 1915, and joined up December of the same year. He joined the R.F.A., and after going overseas was attached for two years to the M.T., A.S.C. He was badly gassed last January whilst with the Trench Motor Battery, was invalided home, but went overseas again last July with the R.F.A. He was killed instantly on the 3rd inst. with a shell. Jackie Metcalfe, as he was familiarly known, was brought up from infancy with his grandparents, Mr. and Mrs. John Metcalfe, Hawes, was one of the quietest and most unassuming of lads and a great favourite with his comrades, and the townspeople generally. He was for years prior to joining up a member of Hawes Church Choir, and also a member of Hawes Brass Band. He is the second member of the choir and the third member of Hawes Band who have fallen in action. His death cast a great gloom over the town, and the utmost sympathy is felt for the family in their great loss.

A Memorial Service in memory of Corporal J. T. Moore, Gunner J. Moore, Lance-Corporal C. D. [Milner], Private John Metcalfe, and Corporal W. Mitton, recently fallen in their country’s service, was conducted at Hawes Parish Church, on Sunday afternoon by the Vicar, the Rev. S. D. Crawford. There were special psalms, and the hymns were ‘On the Resurrection morning,’ ‘Peace, perfect peace,’ and ‘Now the labourer’s task is o’er.’ The Vicar based an appropriate address on the words, ‘O death, where is thy sting?’ and after the Benediction the draped Union Jack was held at the chancel steps by Cadet Lance-Corporal H. Wilson, whilst the Dead March was played on the organ by Mrs. Place and the ‘Last Post’ sounded by Mr. J. Blades.