Joseph Smith (born 3 February 1890) was the son of William and Mary Smith, née Clarkson. William was born at Crosshills and Mary at Silsden, Yorkshire. 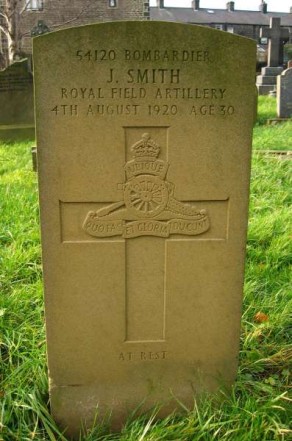 An instance of father and son being borne to the grave at the same time occurred at Silsden on Friday afternoon last, when Mr. William Smith, and his son Joseph Smith, 56, Keighley Road, Silsden, were interred. The double funeral took place at the Silsden Parish Church, the officiating clergyman being the Rev. E.E. Peters (vicar). Mr. Joseph Smith, who had served over eleven years in the army, was demobilised in September last, and placed on the reserve. On the outbreak of war he was serving in India. His unit was called home in December 1914, and he was sent to France early in 1915. He was wounded in the fighting during that year. He was brought to England where he stayed a short time prior to returning to France, where he saw further service extending up to the armistice. He was 30 years of age, and at the time of his demobilisation held the rank of bombardier. He was accorded full military honours at the funeral, the body being conveyed to the cemetery on a gun carriage. The coffin was draped with a large Union Jack, and a firing party from Halifax was in attendance. Deceased’s father had attained the age of 62 years. He was formerly a stone mason, and had worked for a large number of years in Silsden.