Malcolm Colin McGregor Law was the son of Duncan George and Emily Law, née Laycock. Duncan was born at Bradford and Emily at Keighley, Yorkshire.

Malcolm is commemorated on the War Memorial in St. Oswald's Church, Guiseley and by a stained glass window in the church. The window is also in memory of the officers and men of the 1/6th and 2/6th Battalions Duke of Wellington's (West Riding Regiment) who fell in France and Flanders during the Great War. 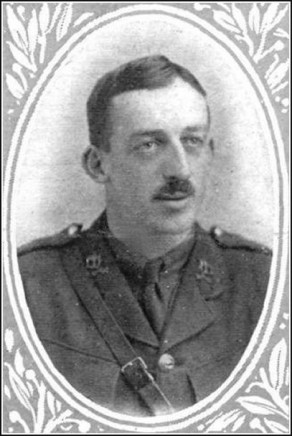 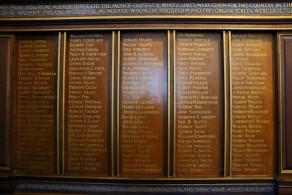 The official list of officers’ casualties published on Monday morning includes the name of Lieutenant M. C. M. Law, of the 6th Duke of Wellington's Regiment (Territorials), who has been wounded in France. A member of the firm of Law, Russell and Co. Limited, Bradford, Lieutenant Law is the son of Mr. Duncan G. Law, of Hawksworth Hall, a former president of the Bradford Chamber of Commerce. Lieut. Law, in the days before the war, took an active interest in the Bradford Guild of Help.

THE ‘DUKE’S’ IN ACTION – OFFICERS AND MEN WOUNDED

News was received in Skipton on Tuesday that the 6th Battalion Duke of Wellington’s West Riding Regiment had suffered a further series of casualties during the recent heavy fighting in France and Flanders. Various rumours as to the extent of the losses have gained currency, but information from reliable sources states that in all two officers and 12 men have been wounded. No details are forthcoming however, except in isolated instances, as to the nature of their injuries, or how they were sustained.

One of the officers wounded is Major C. M. Bateman, whose relatives were informed of the fact on Tuesday. The communication was to the effect that he had been slightly wounded in the back by a piece of shrapnel. Later information indicates that Major Bateman is making satisfactory progress.
The wounded officer has been connected with the 6th West Ridings for many years, and for some time was captain of one of the headquarter companies. He was gazetted as major after the outbreak of war.
Major Bateman is connected with the firm of Messrs. T. and M. Bairstow, manufacturers, of Sutton and Bradford, and was at one time a prominent playing member of the Skipton Rugby Football Club, figuring with much success in the position of wing-three-quarter.

The other officer wounded is Lieut. M. C. M. Law, who in private life is a member of Messrs. T. Russell and Co., merchants, of Bradford.

A supplement to the ‘London Gazette’ of Saturday last contains Sir John French’s final list of recommendations for gallant and distinguished conduct in the Field. The despatch in which Sir John French brings the names to the notice of the Secretary for War is dated November 30. The Secretary of War Office announces that a list of honours and rewards, based on the recommendations, will be published on the earliest possible date.

The following officers, N.C.O.s and men of the 6th Battalion, Duke of Wellington’s West Riding Regiment, are included in the Field Marshall’s list:–

It is a sad coincidence that shortly before the publication of the above list, news should be received of the death from wounds of Lieut. Malcolm C. M. Law. Lieut. Law is the second son of Mr. Duncan G. Law, Hawksworth Hall, Guiseley, Yorkshire, and prior to the departure of the 6th West Ridings for the Front was for a period stationed at Skipton with the 2/6th Battalion.