Maurice Ideson (born 1 February 1890) was the son of John Henry and Mary Ideson, née Lister and brother of T/2nd Lieutenant Joseph Henry Ideson (q.v.). Their father was born at Halton East and mother at Ilkley, Yorkshire.

Maurice was married, in Australia, to Ethel Oddy. 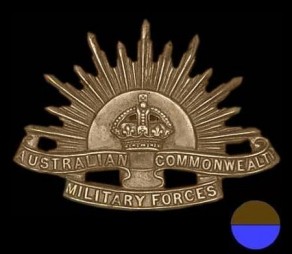 A HEAVY TOLL OF YORKSHIREMEN

LONG LIST OF MEN WHO FELL BEFORE THE FOE

Lieut. J.H. Ideson, younger son of Mr. J.H. Ideson, Westwood, Ilkley, has been accidentally killed while flying in England. He joined the Sherwood Foresters in the early days of the war, and after being at the Front for some time, received a commission in this regiment. He was later wounded, and afterwards became attached to the Royal Flying Corps. His elder brother, Pte. Maurice Ideson, of the Australian Imperial Force, was killed in action on September 3rd last. 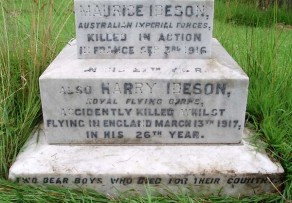 The remains of Lieut. J. H. Ideson, of the Royal Flying Corps., who was accidentally killed while flying in England, were interred with military honours at the Ilkley Cemetery on Saturday afternoon. Prior to interment there was a service at St. Margaret’s Church, conducted by the Rev. H. J. Glennie, vicar. The choir was in attendance, and Lieut. H. M. Dalton was at the organ; the large congregation including most of the representatives of families belonging to the Ilkley district who have suffered bereavement owing to the war.

Lieut. Ideson’s elder brother, Private Maurice Ideson, of the Australian Imperial Force, was killed in action last September. Mr. and Mrs. J. H. Ideson, the dead officer’s father and mother, and Mrs. Maurice Ideson, were the principal mourners, and the military present included Lieut. A. B. Raymond and Lieut. H. Dewhurst, of the Royal Flying Corps, Dartford, sixty of the wounded soldiers from the Ilkley Military Hospital, under Sergeant Cartwright, and a firing party belonging to the York and Lancaster Regiment from the Pontefract Depot, under the command of Captain F. Ibettson.

There were many wreaths, including one from the officers and another from the men of Lieut. Ideson’s squadron. One sent by relatives was beautifully designed to represent an aeroplane propeller.

A very large crowd assembled at the cemetery, and three volleys were fired over the grave, and the ‘Last Post’ sounded by two buglers.