Percy Preston Whitfield was the son of Francis and Annie Whitfield, née Preston. Francis was born at Dent and Annie at Settle, Yorkshire. Annie was the second wife of Francis; they were married in 1878. Francis had married his first wife, Mary Ann Clapham, in 1861. 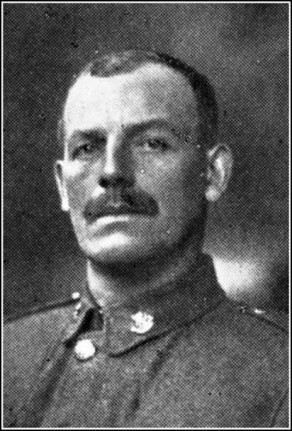 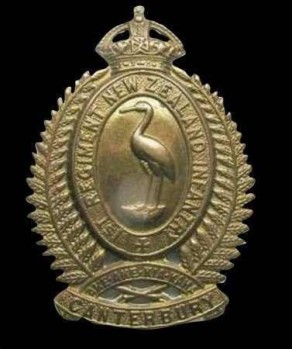 When news gradually filtered through to the town of Bentham in the West Riding of Yorkshire, England, it was a particularly sad time as the people of the town learned that on 9 October 1917, three men from the town had been lost and were not going to come home: two men to the mud and bullets of Passchendaele and one at sea.

Percy Preston Whitefield was born on 28 May 1879 at Thornton in Lonsdale, also in the West Riding of Yorkshire, and near Bentham, (1) the youngest of five sons to Francis (Frank) and Annie Whitfield. (2) The family’s farm “Bowsber” was near the village of Clapham, a short distance from Thornton in Lonsdale, where Frank was well-known in the farming community.

We are not sure of Percy’s pre-war life but it is possible that he worked with his father on the farm, until his father retired. It was possibly after Frank’s retirement that Frank and Annie moved to Bentham. It may have also been about this time that Percy decided to emigrate to New Zealand, which he did in October 1910, making his home at Glenmuick (also spelt Glen Muick), a farm near Cheviot in Canterbury, where he worked as a farm hand.

When war broke out Percy enlisted in the New Zealand Expeditionary Force. There are two Attestation Forms for Percy on his service records held at Archives New Zealand. The first Attestation Form shows that he attested on 18 October 1916. The second (with “Amended Attestation” handwritten along the top), an administrative tidy-up before embarking overseas as Percy had not completed the answers to three questions on his previous Attestation Form, is dated 5 April 1917. Percy started training at Trentham Camp on 8 January 1917 and it is recorded that he was in hospital from 27 January to 31 January 1917.

After training at Trentham Camp, Percy departed from New Zealand on HMNZT No 82 ‘Pakeha’ as a member of C Company, 24th Reinforcements. The men boarded on 14 April 1917 but the sailing of the ship was delayed and the men disembarked on 17 or 18 April. Finally, on 26 April 1917 the men re-embarked and the ship sailed from Wellington. After stopping in Sydney on 2 May for a few days, the ship arrived in Devonport, England, on 28 July 1917.

Percy spent time at Sling Camp near Bulford on the Salisbury Plains in Wiltshire, and during his time in England, he managed to secure leave to see his father in August. His training at Sling Camp completed, Percy left for France on 5 September 1917. More training followed, this time at Etaples and he then joined the New Zealand Division on 15 September 1917, being posted to 12th Company, 3rd Battalion, Canterbury Infantry Regiment.

Prior to Percy’s arrival in England, the New Zealand regiments had been busy up and down the Ypres Salient in Belgium, notably at the Battle of Messines, 7 to 14 June. The New Zealanders had a major influence on the success of the battle in dislodging the Germans off the ridge as a softening up blow prior to the start of the Third Battle of Ypres, 31 July to 6 November, better known as the Battle of Passchendaele.

After 15 September, Percy is recorded as being in the field, that field being Passchendaele and it was at Passchendaele that Percy met his fate in the great sea of mud and tangled debris of war when, on 9 October 1917, he was killed in action. That was a particularly bad day when, during deteriorating conditions and strong German resistance, the attack by the II Anzacs failed at the first hurdle with heavy casualties, including Percy.

Percy’s body was not found and is one of the missing whose name is engraved on Panel 2 on the New Zealand Memorial to the Missing in the central apse of the Tyne Cot Memorial, one of 35,000 other Commonwealth soldiers whose names are engraved on the memorial.

News of Percy’s death was conveyed to his father Frank who was recorded as living at “Hazeldene” (a house possibly on Station Road), Bentham.

A memorial service took place at St Margaret’s Church, Bentham, in November 1917 with the Rev GHC Bartley officiating. Rev Bartley acknowledged Percy’s supreme sacrifice, noting that he was well respected throughout the farming community around the Bentham district.

Percy was the 27th Bentham man to be killed. He was 38 years of age.

(1) In 1972, the boundaries of many counties in the United Kingdom were changed. Prior to 1972, the towns of Bentham and Thornton in Lonsdale were in the county of the West Riding of Yorkshire – they are now in North Yorkshire.
(2) We have no information of the names of the other sons, where they lived and what they did for a living although Percy is mentioned as being the youngest son, so it is unlikely that his brothers served in the war due to their age. We believe one was a policeman in Morecambe. 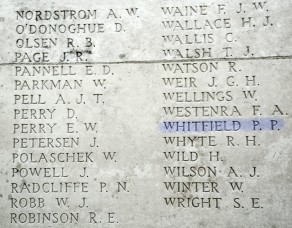 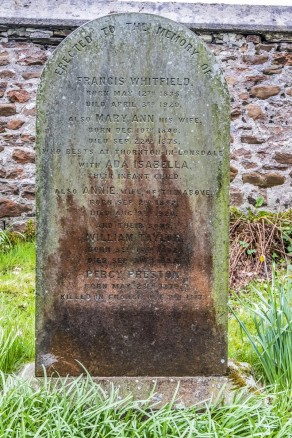 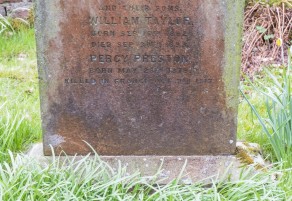 Quite a gloom was cast over the Bentham Auction Mart on Wednesday last when it became known that Private Percy Preston Whitfield, youngest son of Mr. Frank Whitfield, had been killed in action. His father, who lives at Hazeldene, Bentham, received the following telegram on Wednesday morning from the New Zealand Records Office:– “Very much regret to inform you information just received that your son, Private Percy Preston Whitfield, ----Battalion, Canterbury Infantry Regiment, N.Z.E.F., is reported killed in action on 9th October.”

Deceased was 38 years of age and well known and highly respected throughout the Bentham district. When his father retired from farming at Bowsber, Clapham, seven years ago, he emigrated to New Zealand in October 1910. He joined the Canterbury Infantry in August 1916, and came over to England in January this year. He came home in August last on four days’ overseas leave, and was two days in reaching Bentham. He went to France with a New Zealand draft at the end of August. He is the youngest of five sons and brother to Inspector Whitfield, of Morecambe.

The second memorial service for soldiers killed at the Front was held at St. Margaret’s Church on Sunday afternoon. The sacred edifice was well filled by parishioners of every shade of religious and political opinions. The Vicar (the Rev. G. H. C. Bartley) officiated, and the service was choral, commencing with the opening sentences of the burial service, chanted, as a processional with the Union Jack was carried in front, draped with violet. Between the lessons the choir gave the anthem, ‘I heard a voice from Heaven’ very beautifully, and the Vicar read out the names of the fifteen heroes who have laid down their lives from the parish, as well as the three who are missing, and supposed killed, as follows:– Captain D. Morrison; Private Ed. Magoolaghan; Lance Corporal Joe Jackson; Captain S. C. Bartley (the Vicar’s brother); Corporal E. Leeming; Private Tom Wilcock; Captain G. G. Eccles; Private Ezra Stevenson; Private Len Nelson; Captain Pollard; Private Percy Whitfield (N.Z.); Corporal Wm. Robinson; Corporal Harry Smith; Corporal R. Clarke (missing); Private Lancelot Dowbiggin; Private Ed. Briscoe; Private Edwin Smith.

As the names were read out many tears were shed at the memory of the loved ones ‘Gone West’. Then followed an excellent sermon by the Vicar from the words ‘Greater love hath no man than this, that a man lay down his life for his friend’, at the conclusion of which Miss V. Stubbs played the ‘Dead March’ whilst the congregation remained standing. The recessional hymn was ‘For all the Saints’, and at the close the organist played ‘I know that my Redeemer liveth’ as a voluntary. The entire service was of a very impressive character.

On Saturday morning last news reached his mother that Corpl. Tom Harry Smith, of the Grenadier Guards (Machine Gun Section), was killed in action on Oct. 11th. The deceased was well known at Bentham, having been some time ago in the employ of Mr. J. E. Dean, grocer, but later was in the goods warehouse at Miles Platting, Manchester, where he enlisted on Oct. 29th, 1914, as a volunteer. His brother, W. Smith, joined the R.F.A., as a driver. Two step-brothers [McCann] are also serving in France. He was 25 years of age, and stood over 6ft. The deceased’s step-father, Mr. Elijah McCann, is an old Afghan campaigner.

The news also reached Mrs. Hannah Robinson, of Main Street, Bentham, on Sunday morning, that her youngest son, Corpl. Wm. Robinson, of the West Riding Regiment, had been killed in action in France. The deceased soldier was the main support of his widowed mother, and was working at Messrs. George Angus and Co.’s when the order came that all single men had to join up. He went with others on July 5th last year to join up at Keighley.

The death in action of Pte. Percy Preston Whitfield took place in France on Oct. 9th last. He belonged to the New Zealanders, and joined the Auckland Infantry Regiment in November, 1916. He came over to England early this year for training, and paid a visit to his father, Mr. Francis Whitfield, in August last, when he had four days’ leave. He was well known at Bentham. and also resided with his father at Holden House, Westhouse, and at Bonsber, Clapham. He emigrated to New Zealand seven years ago, when his father retired from farming. He was the youngest of six sons, and was 38 years of age.

MEMORIAL SERVICE – The second memorial service for soldiers killed at the front was held at St. Margaret’s Church on Sunday afternoon last. The sacred edifice was well filled by parishioners of every shade of religious and political opinion, and the service was of a solemn and reverent character. The vicar (Rev. G.H.C. Bartley) officiated , and the service was choral. It commenced with the opening sentence of the burial service being chanted as a processional. The Union Jack was carried in front, draped with violets. Between the lessons the choir gave the anthem ‘I heard a voice from Heaven,’ and the Vicar read the names of the 15 dead men belonging to the parish who have laid down their lives, as well as of the three who are missing and supposed killed, viz., Capt. D. Morrison. Pte. Ed Magoolaghan, Lance-Corpl. Joe Jackson, Capt. S.C. Bartley (the Vicar’s brother), Corpl. B. Leeming, Capt. Pollard, Pte. Tom Wilcock, Capt. G.[C.] G. Eccles, Pte. Ezra Stevenson, Pte. Len Nelson, Pte. Percy Whitfield (N.Z.). Corpl. Wm. Robinson, Corpl. Harry Smith, Corpl R. Clark; missing, Pte. Lancelot Dowbiggin, Pte. Ed. Briscoe and Pte. Edwin Smith. Then followed an excellent sermon by the Vicar from the words “Greater love hath no man than this, that a man lay down his life for his friend.” At the conclusion of the sermon Miss V. Stubbs played the ‘Dead march,’ the congregation standing. The processional hymn was ‘For all the saints,’ and at the close the organist played ‘I knew that my Redeemer liveth.’ The service was of a very impressive character throughout.