Richard Lambert (born 23 November 1896) was the son of Richard and Grace Lambert, née Sugden. Richard, senior, was born at Silsden and Grace at Steeton, Yorkshire. 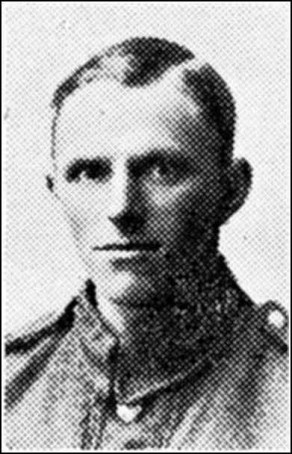 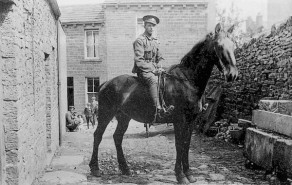 Private Richard Lambert (photograph may have been taken at Sunny Bank, Steeton, Yorkshire)

We learn from the ‘Herald and Leader,’ Retford, of a gallant rescue from drowning on the part of Pte. R. Lambert, of the machine gun section, Second 6th West Riding Regiment, stationed at Retford. Pte. Lambert, who was 19 years old on Wednesday, is the son of Mr. Richard Lambert, butcher, High Street, Steeton, and joined the Army last January. The circumstances are as follows:–Last Saturday afternoon, the son of Ex-Police Constable Presland, of the Retford Borough Police Force, who is now a prisoner of war in Germany, was playing with three others near Woodcocks Bridge on the Chesterfield Canal. He slipped into the deep water near the lock. Some soldiers were playing football in an adjoining field, and on their attention being called by a woman who had witnessed the accident, Pte. Lambert, who had just come out of hospital after a bad attack of influenza, jumped into the water, and rescued the little fellow. It was with difficulty that the lad was brought round by Dr. Beal and the regimental doctor, who ordered his removal to the Retford Hospital, where he is making excellent progress. We congratulate Pte. Lambert upon his courageous conduct.

Mr. Richard Lambert, High Street, Steeton, received the sad news that his youngest son, Private Richard Lambert, had been killed in action in France during the recent heavy fighting. Private Lambert joined up in January 1915, and went out to France in February, 1916 [sic], with the Duke of Wellington’s Regiment.

Mrs. Ralph Hodgson, Queen Street, Steeton, received information yesterday that her husband, Private Ralph Hodgson, K.O.Y.L.I., had died of wounds. Private Hodgson had been in the Army four years, joining the Tyneside Battalion of the Northumberland Fusiliers in 1914, and going out to France in January, 1916, having a leave some 12 months ago. He leaves a widow and two children.

“Last Saturday afternoon” (says ‘The Retford Herald and Leader’), “Pte. M [R]. Lambert, of the machine gun section, 2/6th West Riding Regiment, stationed at Retford, effected a gallant rescue from drowning of William Presland, age 7, son of ex-Police Constable Presland, who is now a prisoner of war in Germany. The boy was playing with three others near Woodcocks Bridge on the Chesterfield Canal, when he slipped into deep water near the locks. Soldiers were having a game of football in an adjoining field, and . . . Pte. Lambert at once jumped into the water, although he had just come out of hospital after a bad attack of influenza. It was with difficulty that the lad was brought round.” Doctors ordered his removal to Retford Hospital, where he is now making satisfactory progress. Pte Lambert was 19 years of age on Wednesday, and is the son of Mr. M [R]. Lambert, butcher, High Street, Steeton. He joined the Army last January.

Information was received yesterday morning that Pte. Richard Lambert, West Riding Regiment, Machine Gun Section, son of Mr. and Mrs. Richard Lambert, Sunny Bank, Steeton, was killed in action on August 30th. He joined up in January, 1915, and went out to France in February, 1917. Whilst stationed at Retford he gallantly rescued from drowning Wm. Presland, the seven year old son of P.C. Presland, of the Retford Borough Police.