Robert Blezard was the son of Robert and Jane Blezard, née Hoyle. Robert, senior, was born at Chipping and Jane at Thornley near Chipping, Lancashire.

A short biography of Robert is included in: ‘In Love, In Gratitude, In Remembrance - Remembering the Men & Women of Slaidburn, Newton in Bowland, Dunsop Bridge, Dale Head & Tosside’ by Margaret Brenchley (2018). 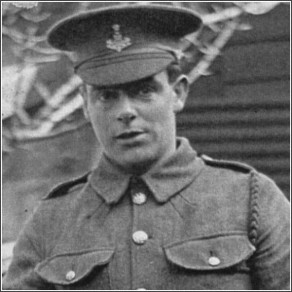 Additional Information: Son of Robert and Jane Blezard, of Newton-in-Bowland, Clitheroe. (CWGC Headstone Personal Inscription: WORTHY OF EVERLASTING LOVE FROM THOSE HE LEFT BEHIND)

A Newton correspondent writes: We have just had three local soldiers over direct from France - Captain Ralph Peel, William Eccles, of Dunsop Bridge, and Robert Bleazard, of Newton. They all look well and hearty and have had some exiting experiences. Pte. Robert Bleazard took part in the battle of Loos and was also in the charge of the 1st July, luckily escaping injury.

Several weeks have elapsed since we announced that Lance-Corporal Robert Bleazard, 19th [sic] Yorkshires, whose home was at Newton, had been unofficially reported killed. This report, unfortunately, was founded on fact, the date of his death being October 4th. The parents however, have been consoled by the receipt of several letters from deceased's officers, testifying to his bravery and soldierly qualities. Lance-Corporal Bleazard was of a very quiet disposition, but he had a healthy man's fondness for sport, which he indulged in at every opportunity. It did not surprise his friends, therefore, when, before the war was many weeks old, he volunteered for service, and had borne himself bravely and well in many hard-fought battles in France. Some idea of the severity of the fighting in which he took part may be gained when it is stated that, at the battle of Loos, he and a comrade were the only members of the section to come through. He also took part in the Somme fighting. In civil life, Lance-Corporal Bleazard was a game-keeper on the Browsholme Hall estate. He was 27 years of age, and will be greatly missed in the district.

LANCE-CORPORAL R. BLEAZARD of the 19th [sic] Yorkshire Regt., whose home was at Newton, has been officially reported killed in action on October 4th. Twenty-seven years of age, he was formerly a gamekeeper on the Browsholme Hall estate, and enlisted three years ago.

Robert Blezard was born in Slaidburn in 1890 and at the time of enlistment on 5 Aug. 1914 lived in a cottage attached to Newton Hall, Newton in Bowland. His father Robert was a gamekeeper by profession and trained his son as such both working for the Newton estate. It is not clear that Robert was prompted to join on the first full day of war because of his profession, but he enlisted in Clitheroe at what is now the post office on King Street.

His training took him to Richmond, Thirsk then to Hertfordshire and Aldershot before entraining for Newhaven to be shipped to France in 1915. He saw action at Loos in September as part of 'A' Coy 10th (Service) Battalion Alexandra, Princess of Wales's Own (Yorkshire Regiment) then the first day of the Somme at Fricourt part of the 21st Division. Moving around the Somme until September 1916 his next major action saw him on the line for the third battle of Ypres. On the night of 3 October his company prepared for the attack on Broodseinde along side the Australians. By early morning of the 4th his company was subjected to a severe bombardment which claimed Robert's life. He was interred at Oxford Road cemetery. 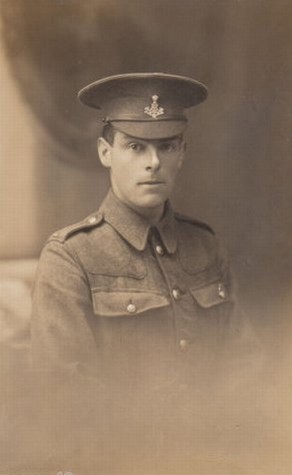 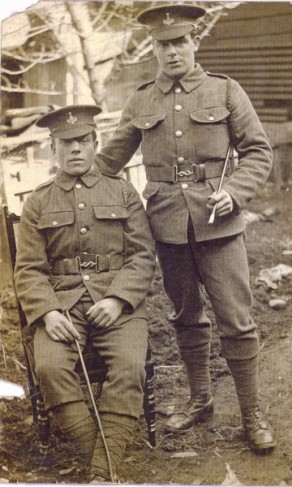 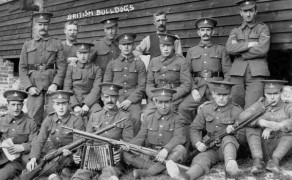 Private Robert Blezard, sitting at the front on the far right 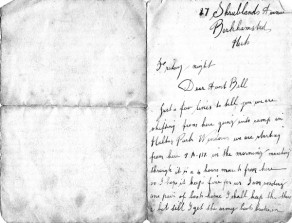 Page 1 of the letter written by Private Robert Blezard in October 1914 to his aunt Isabella Baines, née Blezard 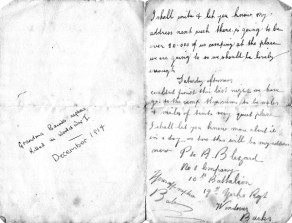 Page 2 of the letter written by Private Robert Blezard in October 1914 to his aunt Isabella Baines, née Blezard 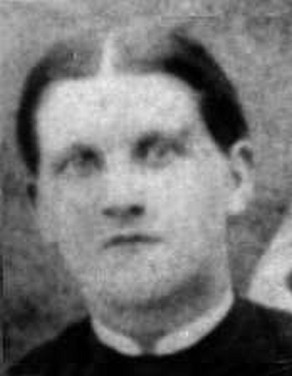 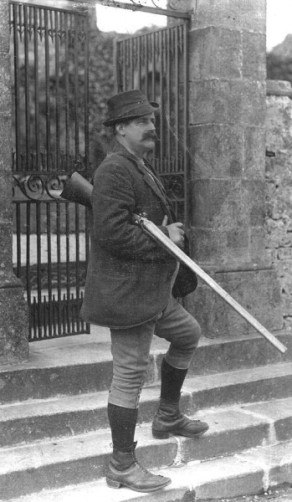 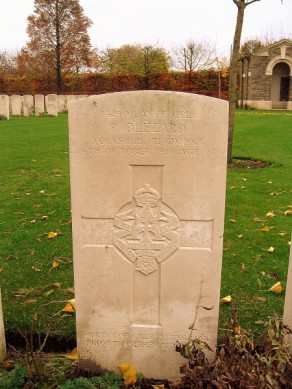 CWGC Headstone - [Personal inscription: WORTHY OF EVERLASTING LOVE/FROM THOSE HE LEFT BEHIND]