Robert Clark was the son of Hezekiah and Eliza Clark, née Smith. Hezekiah was born at Sheep Wash near Rathmell, Yorkshire and Eliza at Burton-in-Kendal, Westmorland.

Robert was married to Catherine Magoolagan in 1900. Catherine was the sister of Private Edward Magoolagan (14404) (q.v.).

1901 Bentham, Yorkshire Census: 10, Lairgill - Robert Clark, aged 24 years, born Bentham. [Robert, with his wife Catherine, and son William H. were boarding with Robert and Catherine Boyd to whom Catherine may have been related.] 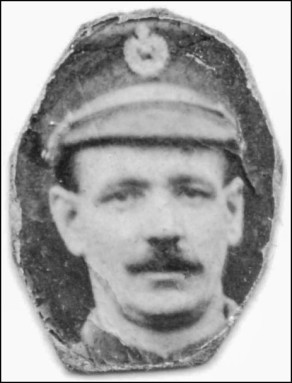 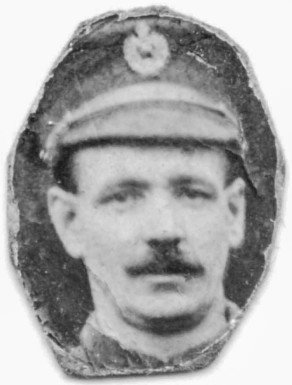 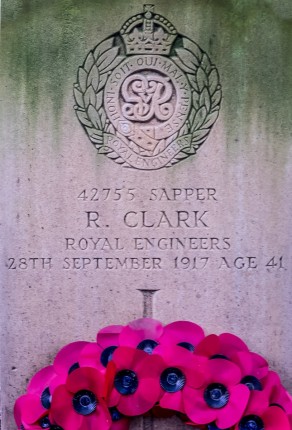 The death of Sapper Robert Clark, the youngest son of the late Mr. H. Clark, took place suddenly at the Military Hospital, Bangor, North Wales, on Friday morning last from appendicitis. The deceased was a well-known stonemason, and served his apprenticeship with Messrs. Cumberland, and was also a member of the I.O.G.T. at Bentham, and a valued member of the Bentham Cricket Club and a fast bowler. He was the first Volunteer to join the forces immediately on the outbreak of war. He joined the Royal Engineers on 31st August 1914, and went out to France with a company of sappers in 1915. He was sent back to England on Christmas Day last suffering from pneumonia, and was some time in the Edinburgh Military Hospital. After recovering he was stationed at Newark, and spent his last visit at Bentham at Whitsuntide. He was removed to Coodhelen, North Wales, where he was taken ill on Wednesday last, the 26th ult., and died on Friday morning before his wife, who had been urgently summoned, could see him.

The body was brought to Bentham on Sunday morning, and the funeral took place at the Parish Church on Monday afternoon. Many relatives and friends followed the remains through the town to their last resting place. A number of Good Templars were present, and several of his old workmates.

Great sympathy is felt for his widow and orphan children, there being eight sons and one little baby daughter to mourn his loss. The Rev. Father Morgan very impressively conducted the funeral service.

The second memorial service for soldiers killed at the Front was held at St. Margaret's Church on Sunday afternoon. The sacred edifice was well filled by parishioners of every shade of religious and political opinions. The Vicar (the Rev. G. H. C. Bartley) officiated, and the service was choral, commencing with the opening sentences of the burial service, chanted, as a processional with the Union Jack was carried in front, draped with violet. Between the lessons the choir gave the anthem, 'I heard a voice from Heaven' very beautifully, and the Vicar read out the names of the fifteen heroes who have laid down their lives from the parish, as well as the three who are missing, and supposed killed, as follows:- Captain D. Morrison; Private Ed. Magoolaghan; Lance Corporal Joe Jackson; Captain S. C. Bartley (the Vicar's brother); Corporal E. Leeming; Private Tom Wilcock; Captain G. G. Eccles; Private Ezra Stevenson; Private Len Nelson; Captain Pollard; Private Percy Whitfield (N.Z.); Corporal Wm. Robinson; Corporal Harry Smith; Corporal R. Clarke (missing); Private Lancelot Dowbiggin; Private Ed. Briscoe; Private Edwin Smith.

As the names were read out many tears were shed at the memory of the loved ones 'Gone West'. Then followed an excellent sermon by the Vicar from the words 'Greater love hath no man than this, that a man lay down his life for his friend', at the conclusion of which Miss V. Stubbs played the 'Dead March' whilst the congregation remained standing. The recessional hymn was 'For all the Saints', and at the close the organist played 'I know that my Redeemer liveth' as a voluntary. The entire service was of a very impressive character.

It is interesting to note that two Bentham Good Templar's have joined the King's Army, namely Robert Clarke, a driver in the Royal Engineers, and Colour-Sergeant Wearing, who is in the Royal Marines and has been wounded in Belgium.

MEMORIAL SERVICE - The second memorial service for soldiers killed at the front was held at St. Margaret's Church on Sunday afternoon last. The sacred edifice was well filled by parishioners of every shade of religious and political opinion, and the service was of a solemn and reverent character. The vicar (Rev. G.H.C. Bartley) officiated , and the service was choral. It commenced with the opening sentence of the burial service being chanted as a processional. The Union Jack was carried in front, draped with violets. Between the lessons the choir gave the anthem 'I heard a voice from Heaven,' and the Vicar read the names of the 15 dead men belonging to the parish who have laid down their lives, as well as of the three who are missing and supposed killed, viz., Capt. D. Morrison. Pte. Ed Magoolaghan, Lance-Corpl. Joe Jackson, Capt. S.C. Bartley (the Vicar's brother), Corpl. B. Leeming, Capt. Pollard, Pte. Tom Wilcock, Capt. G.[C.] G. Eccles, Pte. Ezra Stevenson, Pte. Len Nelson, Pte. Percy Whitfield (N.Z.). Corpl. Wm. Robinson, Corpl. Harry Smith, Corpl R. Clark; missing, Pte. Lancelot Dowbiggin, Pte. Ed. Briscoe and Pte. Edwin Smith. Then followed an excellent sermon by the Vicar from the words "Greater love hath no man than this, that a man lay down his life for his friend." At the conclusion of the sermon Miss V. Stubbs played the 'Dead march,' the congregation standing. The processional hymn was 'For all the saints,' and at the close the organist played 'I knew that my Redeemer liveth.' The service was of a very impressive character throughout.