On the Cotterdale, Hardraw, Hawes and Sedbusk Memorials Samuel is named as 'Samuel Kirk'. 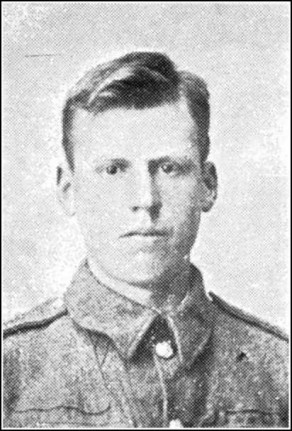 Additional Information: Son of Wilfred and Frances Kirk, of Cotterdale, Hawes, Yorks. (CWGC Headstone Personal Inscription: IN THE MIDST OF LIFE WE ARE IN DEATH)

The desolating hand of war has reached out and touched for the first time the tiny outlying hamlet of Cotterdale near Hawes, and one of its sons, Pte. Samuel Kirk Lambert, Yorkshire Regiment, has fallen for his country, succumbing on November 12th to wounds received in action. The deceased soldier, who was only 23 years of age, enlisted in June 1916, and went to France three months later. The sad news of his death was conveyed to the parents, Mr. and Mrs. W. Kirk, Cotterdale, in an official notification. This was followed by a letter from the chaplain, which bears eloquent testimony to the splendid character of the young soldier:–

“Dear Mrs. Kirk, – News will have already reached you that your son, Pte. S. K. Lambert, died of wounds yesterday – news, the meaning of which to you I can only guess. But in spite of the sorrow it must bring, is there not also in it a note of triumph for those of us who believe in the love of God? I was with your boy before he passed away and he sent you the message of his love. He was a splendid boy and you may well be proud of such a son. It was my privilege to lay him to rest today in a little cemetery behind the lines. Your son gave his life for his country and for love of you. I may say that God will give you His own comfort and the peace which passeth understanding.”

Much sympathy is felt for the parents in their sad bereavement.

KIRK – In loving memory of our dear nephew and cousin, Private Samuel Kirk, who was killed in action November 12th, 1917.

Somewhere in France, in a lonely grave,
Beside his comrades he is laid;
A loving nephew and cousin dear,
None at his grave to shed a tear.
No one who knew him need ever be told,
A warmer heart death never made cold.

From his loving Aunt, Uncle and Cousins at Cotterdale.

It may be a soldier’s honour
For his country’s cause to fall;
But we cannot think of the glory
For the sorrow it has caused us all.
We do not forget him, nor do we intend,
We think of him daily and will to the end,
Gone and forgotten by some he may be,
But dear to our memory for ever he’ll be,

From his loving Father, Mother and Sister.

Three years have passed, our hearts still sore,
As time goes on we miss him more;
No mother’s care did him attend,
Nor o’er him a father bend;
No sister by to shed a tear,
No loved one his last words to hear.