Wilfred Hall was the son of John Burrows and Elizabeth Alice Hall, née Calvert. John was born at Castle Bytham, Lincolnshire and Elizabeth at Carleton-in-Craven, Yorkshire. 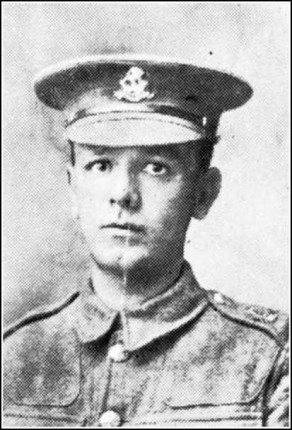 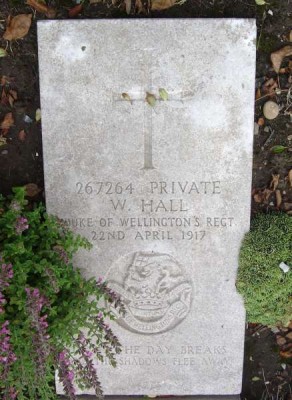 Mr. and Mrs. John Hall, 30 Sawley Street, Skipton, received a telegram from the Infantry Records Office, York, on Friday, stating that their son, Private Wilfred Hall of the Duke of Wellington’s Regiment, was dangerously ill suffering from bomb wounds in the right hand, abdomen and leg, and that he was being nursed in the 3rd Canadian General Hospital, Boulogne. Subsequently, a letter was received from Captain G.B. Bruce, who stated that Pte. Hall was wounded on April 16th whilst in the execution of his duty, and added:– “Your son will be greatly missed by the section whilst he is away. I have always found him cheerful and ready to do anything which might be required of him. He has done good work with us since the section was formed.”

Letters of sympathy and containing news of Pte. Hall’s condition have also been received from an Army Chaplain.

Pte. Hall is 27 years of age and, up to enlisting in March 1916, was a weaver at Broughton Road Shed, Skipton (Mr. J. Wilkinson’s). He has been at the Front since January last. He played cricket with the Skipton Club and is also a fine billiards player, having been a member of the Carleton Liberal Club billiard team when his family lived at Carleton. He was also a member of the Water Street Wesleyan Young Men’s Class up to enlisting. His brother, Pte. Allan Hall, is also serving with the Duke of Wellington’s Regiment at the Front, where he has been since April 1915.

Since the above was written we regret to say that a telegraphic message was received on Tuesday afternoon from the Territorial Records Office, York stating that Pte. Hall had succumbed to his wounds.

The above is a photograph of Pte. Wilfred Hall, of the Duke of Wellington’s Regiment, son of Mr. and Mrs. John Hall, 30, Sawley St., Skipton, who, as reported in these columns last week, died in the 3rd Canadian General Hospital, Boulogne, as the result of wounds received in action in France. Pte. Hall was 27 years of age, and his death is very much regretted by a wide circle of friends in Skipton.

HALL – In loving memory of Private Wilfred Hall, Duke of Wellington’s, who died of wounds in France, April 21st, 1917.

From his loving Father and Mother, Sister and Brother.

HALL – In ever loving memory of our dear son and brother, Private Wilfred Hall, 2/6th Duke of Wellington’s, who died of wounds April 21st, 1917, at Boulogne (dearly loved).

HALL – In loving memory of Wilfred Hall, who died of wounds at Boulogne April 21st, 1917.

“Till we meet again.”

HALL – In ever loving memory of our dear son, Wilfred Hall (Wilf), who died of wounds in Boulogne, April 21st, 1917, and is buried at St. Martin’s Cemetery.

Mr. and Mrs. John Hall, 30, Sawley Street, Skipton, have received official news from the Records Office, York, that their son, Private Wilfred Hall, of the West Riding Regiment, was severely wounded by a bomb in the right hand, abdomen and leg, on April 15th, whilst in the execution of his duty, and that he is at present in hospital at Boulogne. In a letter dated April 16th, to Private Hall’s parents, Captain G.B. Bruce states:– “Your son will be greatly missed by the section whilst he is away. I found him always cheerful, and ready to do anything which might be required of him, and he has done good work with us since the section was formed.” A telegram has since been received that Private Hall had passed away. Letters of sympathy have also been received from the army chaplain. Private Hall, who was 27 years of age, enlisted in March of last year, and had been in France since January. Prior to enlisting he was employed as a weaver by Mr. J. Wilkinson, Broughton Road Shed, Skipton. He was well-known as a promising member of the Skipton Cricket Club eleven, and as one of the best billiard players in the town. He was also a member of the Young Men’s Class at the Water Street Wesleyan Sunday school. Prior to coming to reside at Skipton the family resided at Carleton. Mr. and Mrs. Hall have another son, Pte. Allan Hall, who is serving with the Duke of Wellington’s West Riding Regiment. He has been out in France about two years.

ACCIDENT TO A SKIPTON SOLDIER

Private Allan Hall, of the West Riding Regiment, son of Mr. and Mrs John Hall, of 30, Sawley Street, Skipton, has had his hip dislocated whilst serving at the front, and is at present in hospital. Like his brother, Private Wilfred Hall, who was killed some time ago, he was a playing member of the first eleven of the Skipton Cricket Club. He was also a member of the Water Street Wesleyan Choir, and joined up soon after the outbreak of war.

In loving memory of Pte. Wilfred Hall, Duke of Wellington’s Regiment, who died of wounds in France on April 21st, 1917.

– From his loving Father, Mother, Sister and Brother.