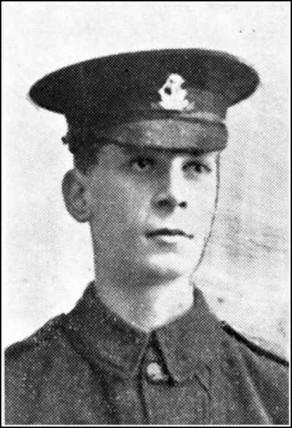 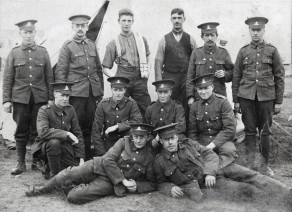 Group of soldiers at Strensall Camp, near York, circa 1915

Willie Hargreaves is on the back row with a towel over his shoulder. Twin brothers Willie and Thomas Hackston are kneeling in the middle row, Willie is on the far left, followed by Thomas

Courtesy of Mr and Mrs Robinson (née Jones) and kindly supplied by Paul Wilkinson of the Sutton-in-Craven village website (www.sutton-in-craven.org.uk)

The marriage was solemnised at St. Thomas’s Church on Tuesday afternoon between Miss Doris Riley, eldest daughter of Mrs. Riley of Holmfield, Sutton-in-Craven, and Lance Corporal William Hargreaves, son of Mr. and Mrs. James Hargreaves, of Crag View, Sutton. The bride was dressed in white and also wore a veil with a wreath of orange blossoms, lent to her by her aunt, Mrs. Richard W. Riley. The bridesmaids were Miss Marion Riley (sister of the bride) and Miss Edith Hargreaves (sister of the bridegroom) and they also were dressed in white, and wore black hats. Mr. Norman Hargreaves (brother of the bridegroom) officiated as ‘best man’, and the bride was given away by her uncle, Mr. Richard William Riley. The officiating minister was the Rev. A. R. Light. After the marriage ceremony a reception and tea was held at the Sutton-in-Craven Post Office. The bridegroom has been home on eight days’ leave from the trenches, and returns today (Friday). He is in the Duke of Wellington’s Regiment, and has been out in France over fifteen months. He enlisted in the early days of the war, and prior to enlistment worked for Messrs. T. and M. Bairstow, Sutton Mills.

Lance-Corporal Willie Hargreaves, of Sutton, has this week been home on leave from the trenches in France. He is with the Duke of Wellington’s, and has been over a year in France. He goes back today (Friday).

On Saturday evening Mrs. Willie Hargreaves, of Holmfield, Sutton-in-Craven, received an intimation from Captain T.S. Holland, of the West Riding Regiment, informing her that her husband, Lance Corporal Willie Hargreaves, had been killed in action “Somewhere in France”. The letter, which is dated 26th May 1917, is as follows:–

“Dear Mrs. Hargreaves, – I am truly sorry to have to inform you of the death of your husband. He was killed instantaneously by a shell in the front line on the night of the 24th. He was a most efficient N.C.O. and had become very popular both with his officers, brother N.C.O.s and men, and I know I am speaking for all when I say that his loss will be most deeply regretted by all with whom he came in contact. He always carried out his duties in a most satisfactory manner, and I have lost a very valuable N.C.O., and his men have lost a true comrade, and I cannot express my sympathy as I should like to do, but I hope it will be some consolation for you to know that he died in the execution of his duty like the true soldier he was. He was buried this morning in a well-kept British Cemetery well behind the line, and the service was read over by an Army Chaplain. I hope you will excuse me from writing more, as I am unable to put into words my feelings. Hoping you will bear up bravely under this cruel loss, and assuring you of my deepest sympathy. I remain, yours very truly, (signed) T. S. HOLLAND, Captain O/C, B Company, West Riding Regiment.”

Lance Corporal Hargreaves joined the West Riding Regiment a month after the outbreak of war, and had been out in France for over two years. At the time of enlistment he was employed by Messrs. T. and M. Bairstow, Sutton Mills. He only had one leave all the time he was in France. He was home on leave at the beginning of last October, and during the time he was home he was quietly married to Miss Doris Riley, of Holmfield. Lance Corporal Hargreaves was of a quiet, unassuming disposition, and as manly a fellow as it was possible to imagine, and his loss is very keenly felt in the two villages. He was known by everyone, and loved by all with whom he came in contact. At the time of his death he was a Lewis gunner. His younger brother, Private Allan Hargreaves, is with the Royal Field Artillery in France.

Private Arnold Leach, also of Holmfield, a pal of Lance Corporal Hargreaves, arrived home on Saturday night on leave from the Front, and he stated that he and several other comrades buried him behind the lines. Private Leach says the Company had been in the trenches two days over the time when his chum was killed. Just before he was killed a big German shell came whizzing past Lance Corporal Hargreaves, who was engaged cleaning his gun, but he never moved, and went on with his work as if nothing had happened. He was cleaning his gun at the time of his death. He had written home regularly and letters were received from him during last week, and the news of his death came as a great shock to his relatives. All the time he has been out he had never once complained, and Private Leach says if his chum had not been killed he would shortly have received his second stripe.

Lance Corporal Hargreaves was an old Sunday School scholar of the Sutton Baptist Sunday School. This is the second loss his widow has sustained. Her brother, Lance Corporal Norman Riley, died of gunshot wounds in the head in December 1915. Lance Corporal Riley had his name sent in for promotion the day he was killed, and his officer at the time of his death wrote home to his parents and said that if he had lived he would probably have been mentioned in despatches for beating off a German bombing attack with his fifteen platoon bombers.

KHAKI WEDDING – On Tuesday afternoon a pretty wedding was solemnised at St. Thomas’s Church. The officiating clergyman was Rev. A.R. Light. The parties were Lance Corporal William Hargreaves, of the ‘Dukes’, second son of Mr. and Mrs. James Hargreaves, of Crag View, Sutton, and Miss Doris Riley, elder daughter of the late Mr. Walter H. Riley of Holme Bridge. The bride, who was given away by her uncle, Mr. Richard William Riley, sub-postmaster, Sutton, was attended by Miss Marion Riley, her sister, and Miss Edith Hargreaves, sister of the bridegroom. Mr. Norman Hargreaves, eldest brother, acted as best man. The bridegroom is home on furlough from the Front for the first time after 18 months’ active service, having been in the midst of some of the heaviest fighting since the beginning of the great push in July. His younger brother, Private Allan Hargreaves, is in the R.F.A. in training. A shadow was cast over the proceedings owing to the absence of Private Norman Riley, elder brother of the bride, who was killed in action in December last.

It was with feelings of deep regret that the residents of Sutton learned on Saturday last that another of their young men had fallen in the great conflict and deep sympathy is felt for the young widow, and his parents and family. Lance Corporal Willie Hargreaves, of the Duke of Wellington’s Regiment, was a young man highly respected in the district. He was of a rather reserved mature, but in all his work, whether at home or in the army, he was careful in carrying out the duties that were allotted to him. He joined the forces in September, 1914, being then only 20 years of age. He went out to France in June, 1915, and after 15 months (during which time he was in active service) he had his first leave home, and was married in October last year. Lance-Corpl. Hargreaves’ younger brother is also in the army. His bother-in-law, Lance-Corpl. Norman Riley (a very promising young man) made the supreme sacrifice some 18 months ago. Prior to joining the forces, the deceased was employed at T. and M. Bairstow’s, Sutton Mill; he was a member of the Sutton United Football Club. The following letter has been received from the officer (Capt. J. S. Holland):– “I am truly sorry to have to inform you of the death of your husband. He was killed instantly by a shell in the front line on June 24th. He was n most efficient N.C.O., and had become very popular both with his officers, brother N.C.O.’s and men. I know I am speaking for all of us when I say that his loss is and will be most deeply regretted by all with whom he came into contact. He always carried out his duties in a most satisfactory manner. I have lost a very valuable N.C.O., and the men have lost a true comrade. I cannot express my sympathy as I should like, but I hope it will be some consolation for you to know that he died in the execution of his duties like a true soldier. He was buried this morning in a well-kept British cemetery well behind the lines, and the service was read over his body by an army chaplain. Hoping you will bear up bravely in this cruel loss. Assuring you of my deepest sympathy.”