Edgar Bradley Hodgson was the son of Mark and Mary Jane Hodgson, née Drax. Mark was born at Hogsthorpe, Lincolnshire and Mary at Newport near Brough, Yorkshire.

Edgar is commemorated on Lincoln War Memorial; on the Ilkley War Memorial, Edgar, is named as Edward.

Edgar is also commemorated in the 'Roll of Honour Ninth Duke of Wellington's W.R. Regiment' book. 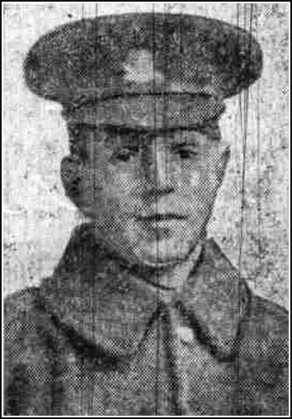 Much sympathy was felt in the City when it became known that Pte. Edgar B. (Ted) Hodgson, the third son of Mr. and Mrs. Hodgson, of 1, Ashlin Grove, Lincoln had been killed in action on Nov. 7th.

The first intimation of the death of their son was received by Mr. and Mrs. Hodgson in the following letter from Pte. T. Otty, bearing date Nov. 7th, 1915:– Dear Mrs. Hodgson, – I am sorry to have to relate to you the sad news of your dear son, Edgar. He was doing his duty, this morning, when he was hit by a stray bullet and died bravely, soon afterwards. Ted and myself have been good friends from enlisting 14 months ago, and I thought it my duty to break the sad news to you. It was his wish that we should let you know, and I can truly say that he died like a soldier – bravely. He was a good worker and I shall lose a good and true friend. I trust and hope God will give you His help to bear this sorrowful burden. I ca assure you he will be put peacefully away with other comrades. Hoping you will accept my deepest sympathy, I remain, yours respectfully, Thomas Otty.

P.S. – I am going to his funeral at six p.m., to-night, and I am putting a decent cross on his grave.

A further letter from another of deceased’s friends reads:–

“It is with regret that I tell you of Ted Hodgson’s death. He died from a bullet wound. The bullet entered his left arm and lodged in his left lung. Poor Ted, a nobler and kinder comrade I never met, and all our boys feel the loss very much. I recollect Ted saying to me a few weeks ago: ‘I pity you poor lads in the trenches.’

“We had some wet weather, and I came down to headquarters from the firing line in charge of a fatigue party. Ted was at headquarters, so, of course, well behind the firing line, and when it was our lot to be cold, wet and uncomfortable, Ted was more or less ‘comfy’ and dry. This particular morning Ted said: ‘You look cold,’ and made me go to his dug-out and gave me a pint of hot tea and some bacon and bread and a pair of dry socks. He said: ‘I do pity you poor lads up yonder’ – meaning the firing line.

“There were scores of actions like these which distinguished Ted and made him liked and respected by all ranks – such are the fortunes, or misfortunes, of war.

“I do not know his address or people at Lincoln, but I know you will convey the sad news to his mother. Tell her to accept my deepest sympathy, and that of all the N.C.O.’s and men of his platoon. I may say that he died as he lived – nobly.”

Pte. Ted Hodgson was 24 years old, and served his apprenticeship, as hairdresser, with Mr. Kirkham, Guildhall-street, Lincoln. On the outbreak of war he was working at Ilkley, and in September last year enlisted in the 9th Battalion Duke of Wellington’s West Riding Regiment. He had only been in France about four months at the time of his death. His loss will be keenly felt in the west-end of the city, where he was very well known.

Private Edward Hodgson, who joined the Ilkley ‘Pals’ Company, 9th West Riding Regiment, in the early days of the war, has been killed in Flanders. He was the son of Mr. M. Hodgson, Ashlin Grove, Lincoln, and up to joining the colours was assistant to Mr. S. de Lacey, hairdresser, Ilkley. He was struck with a stray bullet on November 7th, and died soon afterwards, being buried the same evening.