The British Army Service Record for Edward Metcalfe exists but may be incomplete.

Edward joined the Army Ordnance Corps on 25.10.15 and transferred to the Duke of Wellington's (West Riding Regiment) on 18.6.17.

A short biography of Edward is included in: ‘A Grammar School at War - The Story of Ermysted’s Grammar School during the Great War’ by Steven Howarth (2007). 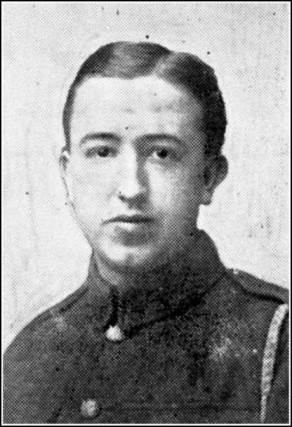 With regret we have also to record the death from wounds on December 3rd of Lance-Corporal Edward Metcalfe, Duke of Wellington’s West Riding Regiment, son of Mrs. E. Metcalfe, Glenroyd, Park Avenue, Skipton. The sad news was received from the Records Office, York, on Tuesday morning, but no details are yet to hand. Only 23 years of age, deceased was educated at the Skipton Grammar School and the Keighley Technical School, and was learning designing with the firm of Messrs. Firth and Moorhouse, Skipton. He enlisted in October 1914, the week before he attained his majority, and for a long period was in the Army Ordnance Corps, being on the office staff at Didcot. Subsequently, however, he was transferred to the West Riding Regiment, and sent to the Front about eight weeks ago. He was a fine lad whose future was full of promise, and much sympathy is felt with the bereaved mother, who has another son, Private Sidney Day, at the Front.

METCALFE – In loving memory of our dear son and brother, Lance-Corporal Edward Metcalfe, who died of wounds received in France December 3rd, 1917, aged 23 years, and was interred in Achiet-le-grand Communal Cemetery.

Days of sadness still come o’er us,
Hidden tears oft-times flow,
Memory keeps our loved one near us,
Though he died one year ago.

Lance-Corporal Edward Metcalfe, of the Duke of Wellington’s West Riding Regiment, son of Mrs. Edward Metcalfe, of Glen Royd, Gargrave Road, Skipton, died from wounds received in action on December 3rd. Lance-Corpl. Metcalfe, who was 23 years of age, enlisted in October, 1914, and had only been in France about eight weeks. He was educated at the Skipton Grammar School and the Keighley Technical Institute, and prior to enlisting he was learning designing with Messrs. Firth and Moorhouse, manufacturers, Skipton. Mrs. Metcalfe has also another son serving in France.