Frederick Stephen Metcalfe (born 19 August 1894) was the son of Stephen and Mary Hannah Metcalfe, née Woolley and brother of A/L/Corporal Alexander John Metcalfe (18/543) (q.v.). Their father was born at Carleton-in-Craven and mother at Ledsham, Yorkshire.

The British Army Service Record for Frederick Stephen Metcalfe exists but may be incomplete.

Additional Information: Son of Stephen and Mary Hannah Metcalfe. Born at Carleton, Skipton. (CWGC Headstone Personal Inscription: THE CARE OF THEM IS WITH THE MOST HIGH) 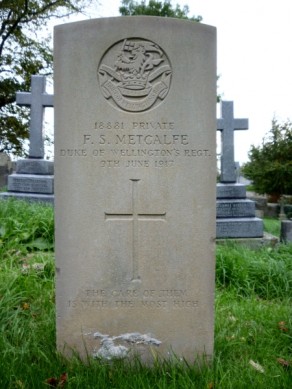 CWGC Headstone - [Personal inscription: 'THE CARE OF THEM IS WITH THE MOST HIGH']

Called Up – Two young men, Messrs. Fred Metcalfe and Percy Miller, joined the colours on Monday under Lord Derby’s Scheme. They journeyed to South Shields early on Tuesday morning, where they are to be trained.

We regret to report that Private Frederick Stephen Metcalfe, of the Duke of Wellington’s Regiment, youngest son of the late Mr. Stephen Metcalfe, who was manager for W. and J. Slingsby, Carleton, died of wounds received in action in France last Saturday morning in the Southwark Military Hospital, London. The wounds were received on April 25th, at which date the deceased was acting as a stretcher-bearer. The deceased is the last of Mr. Stephen Metcalfe’s family. His brother, Lance-Corporal John Metcalfe, was killed in action on the Western Front last year. In civil life Pte. F. S. Metcalfe was in training as an accountant, being articled with Mr. C. H. Best, Bradford. He had passed two examinations when he joined up in February last year, and was to have sat for the final examination next year. The deceased had been in London for some time. He was first wounded in November last, and again, as stated above, in April. He was aged 22 years, and the sympathy of the village goes out to the relatives in the loss of a promising lad.

The funeral took place on Wednesday, when there was a large congregation – a mark of true appreciation of the deceased soldier. The service both inside the Church and at the graveside was taken by the Rev. F. G. Badrick, curate, in the absence, through indisposition, of the Vicar, the Rev. E. T. Birch-Reynardson. The choir, of which the deceased was formerly a member, officiated at both the services, and the hymn ‘On the radiant morn’ was sung inside the Church, and ‘Sun of my Soul’ at the graveside. The congregation was a representative one. Amongst the many beautiful floral tributes sent was one from the members of the choir; one from his former employer, Mr. Chas. Best, accountant, Bradford; also one from the staff.

Lance-Corporal Alexander John Metcalfe, of the Durham Light Infantry, and elder son of the late Mr. Stephen Metcalfe, and a former manager at Carleton Mills, has been killed in action. Lance-Corporal Metcalfe, when at home, resided with his aunt, Mrs. Stephenson, at Sunny Bank, Carleton. He was 24 years of age, and enlisted in Durham in November 1914. He went with his regiment to Egypt before Christmas last year, and came to France in the spring. Lance-Corporal Metcalfe was a certificated teacher in Durham under the Durham County Council. He was educated at the Skipton Grammar School and later went to St. John’s College, Battersea, London. He was formerly a member of the cricket and football teams at the Skipton Grammar School, and also played football with the college team. He has also another brother, Pte. Frederick Stephen Metcalfe, at the Front, who is attached to the 9th Duke of Wellington’s West Riding Regiment. Prior to enlisting he was articled with Mr. Charles H. Best, accountant, of Bradford.

A letter received by Mrs. Stephenson, from a friend of Lance-Corporal Metcalfe, states that on the night of July 27th their trench was raided by the Germans, and Metcalfe was taken unawares and shot. They chased the German who was the means of his death and killed him. The writer also spoke in high terms of the deceased’s qualities as a soldier and also as a friend.

A Chaplain of the Forces writes that he buried Lance-Corporal Metcalfe behind the lines the day after he was killed. He would see to a cross being put over his grave and a record kept.

SOLDIER’S FUNERAL – A gloom was cast over the village on Saturday evening last when news came that Private F. Metcalfe had died of his wounds in a hospital in London. Private Fred Metcalfe was the youngest son of the late Mr. Stephen Metcalfe, who was manager for the firm of Messrs. W. and J. Slingsby, Ltd. Private Metcalfe was a very promising young man. He was in an accountant’s office in Bradford, and also a manager for the Yorkshire Penny Bank. He was a member of the choir at the Parish Church, and was well-known and highly respected in the village. He was called to the colours in February, 1916, and went out to France the following May. His only brother, Lance-Corporal John Metcalfe, was a schoolmaster, and was killed in action last July. There were only these two sons and both have made the supreme sacrifice for King and country, The interment took place on Wednesday afternoon in the village churchyard, Rev. F.G. Badrick being the officiating minister. There was a crowded congregation at the Church, and the choir chanted the 39th Psalm, and sang the hymn ‘The radiant morn has passed away,’ and at the graveside the choir sang, ‘Sun of my soul.’ A large number of floral tributes were sent by friends.