The image of the cap badge also shows the colour patch of the unit. 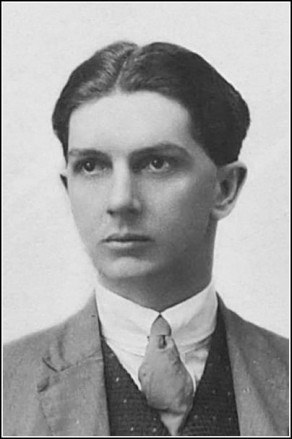 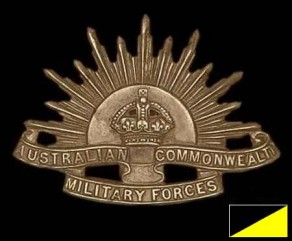 KILLED AT THE DARDANELLES

Clitheronians were surprised and pained to find in Monday’s casualty list from the Dardanelles the name of Sergeant G. G. Horsfall, of the 10th Light Horse Regiment, elder son of Captain and Mrs. Horsfall, of Church-street, who was stated to have been killed in action.

His relatives had no news concerning Sergeant Horsfall at the time but on Wednesday morning a telegram was received from Lieutenant Throssell, bearing out the official notification in the newspapers.

Sergeant Horsfall was educated at Clitheroe Grammar School and at Tonbridge. When the war broke out he was in business at Singapore, but with a fine spirit of patriotism, he lost no time in proceeding to Australia, the nearest way, as it were, into the firing line. There he joined the Light Horse Regiment and left for Europe with the second contingent. While in Egypt he was promoted to sergeant, and late proceeded to the Dardanelles. He was killed in the same engagement in which Lieutenant Throssell won the Victoria Cross, and in every probability was with the lieutenant during the exploits which earned the reward.

Sergeant Horsfall leaves a widow and two children, with whom the deepest sympathy is felt and which is equally extended to Captain and Mrs. Horsfall. Since the outbreak of war, Mrs. G. G. Horsfall has been residing in Clitheroe.

SERGT GEOFFREY GARNETT HORSFALL, 10TH AUSTRALIAN LIGHT HORSE. KILLED IN ACTION AT WALKER'S RIDGE, ANZAC, GALLIPOLI, AUGUST 29TH, 1915. AGED 31. At the School 1896—1901 (Judde House). Sergt. G. G. Horsfall was the elder son of Alfred Horsfall and Mrs. Horsfall, of Clitheroe, Lancashire. On leaving School he went out to Singapore, where he was in an export and import office for a time, and then was with Linggi Plantations, Ltd., at Seremban, Malay States, until 1910, when he married, and became partner in a firm of brokers at Singapore. He came home in 1913, and then went out to Australia. He was a devoted husband and father, and left his widow with two children, a son and a daughter. His son died on February 9th, 1917. When war broke out he applied for a commission in the 10th Light Horse; but, as there was some delay, he joined as a trooper and went with the Regiment to Egypt in March. He had a severe attack of pneumonia in Egypt, and his CO. advised that he should stay behind, but he refused, saving that he was "out for the V.C," and in his last letter home said that if he fell it must be remembered that it was in a good and just cause and that he wanted to fight. When the Regiment went to the Gallipoli Peninsula early in August, they left their horses behind in Egypt and went as infantry. They were continuously in action from August 6th to 10th, and he was killed in the action at Walker's Ridge, Anzac, on August 29th, 1915. The only information that was available as to the circumstances under which he met his death had been obtained from his officer, Lieut. Throssell, V.C., of the 10th L.H., who was in hospital in England. It is evident that Sergt. Horsfall displayed that reckless bravery which has been so conspicuous in this War, and not least on the part of our colonial troops. The following account of what Lieut. Throssell told his visitor was sent to Sergt. Horsfall's mother, and is taken from the local paper:— "On the morning of Sunday, August 29th, they had orders to take a trench and hold it. They had a hard task, and in the fight the 10th Light Horse won a glorious name. Only twenty-five men were left out of eight hundred. They had been fighting for a few hours when Sergt. Horsfall fell. He was shot through the forehead and rolled back near Lieut. Throssell, and died instantaneously. He was standing firing at the time, and could not have had a more glorious end." Lieut. Throssell said that Sergt. Horsfall was one of the bravest men he had ever met. He was simply amazed at the reckless bravery he displayed.

Mrs. Geoffrey Horsfall, Church street, who has suffered several bereavements since the war began, lost her only son, a bright little fellow of five years, last Friday. The interment took place in St. Joseph’s Cemetery on Saturday. General sympathy will be extended to Mrs. Horsfall in the sad circumstances of her bereavement. In two years she has lost her mother, her husband, two brothers, and now her only boy has been taken. 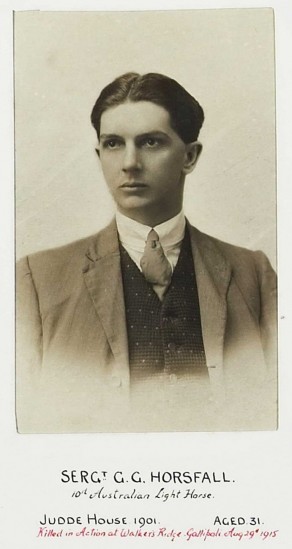