George Abraham Golding was the son of Isaac and Lydia Golding, née Coulson and brother of Private Leonard Golding, 241455, 2nd Bn East Lancashire Regiment, who was killed in action on the 29 August 1918. Their father was born at March and mother at Eastrea, Whittlesey, Cambridgeshire.

George was married to Essie Ann Brown in 1898.

George is listed in the Nominal Roll of the 2/6th Battalion Duke of Wellington's (West Riding Regiment): 'B' Coy - Cpl. G. Golding.

In the Awards section of the book 'West Riding Territorials in the Great War' by Laurie Magnus, George’s battalion is given as the 2/7th Bn Duke of Wellington's (West Riding Regiment). The 2/6th Bn was disbanded on the 31 January 1918 and George was transferred to the 2/7th Bn. The 2/7th Bn was reduced to a training cadre on the 18 June 1918; it was absorbed by the 29th (Service) Bn Durham Light Infantry, 14th (Light) Division.

Pte. Leonard Golding (28), 241455, East Lancs. Regt., whose wife and two children live at 38, Glebe-st., Burnley, was killed in action on Aug. 29th. He had been in the Army since May, 1915, and had once been slightly wounded in the arm. By occupation he was a weaver at Healy Royd. He was connected with the Good Templars. Many relatives serving include two brothers and a brother-in-law. One brother, Sergt. George Golding has won the M.M. and Croix-de-Guerre and been recommended for the D.C.M., while the other, Pte. Wm. Golding, is in the East Lancs. The latter has been wounded twice, whilst Pte. Jack Tooby, Royal Scots Fusiliers, brother-in-law, has also been wounded. Second-Lieut. Baxter wrote to Mrs. Golding: “The facts appear to be that the Huns bombed a portion of the trench where your husband was posted on Aug. 28th, and he, whilst gallantly fighting along with the remainder of his section, was struck by a fragment of an exploding bomb. He was quickly unconscious, and must have passed away quite painlessly.” The officer, who was the deceased soldier’s platoon commander, added: “He was always ready and willing to do anything I told him.” 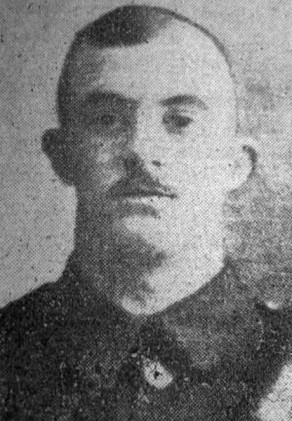 The French War Medal has been conferred upon Sergeant George Golding, Duke of Wellington’s Regiment, for conspicuous gallantry and devotion in the attack on Boulon Wood on 27th November last. A native of Burnley he was formerly a well-known footballer associated with the Accrington Club and later with the Barnoldswick United. He enlisted in the Duke of Wellington’s three years ago, but did not go out to France until February of last year. Sergt. Golding is a married man, his wife and daughter residing at 34, Town head, Barnoldswick.

The circumstances of the death of ex-Sergeant George A. Golding, of 34 Town Head, which occurred on Saturday after prolonged illness, are particularly sad. The deceased, who was 41 years of age, and leaves a widow and two children, was a native of Burnley, but had resided at Barnoldswick for many years. He followed the occupation of twister and loomer in the employ of Mr. G. Dethick Brown. Crownest Shed. His first introduction to the town was as a player for the old Barnoldswick United Football Club, of which he was captain when the team first won the Craven Cup. Enlisting in ‘Kitchener’s Army’ in the early days of the war, he served right through to the end, and emerged from the struggle practically unscathed, notwithstanding his participation in some of the heaviest fighting. While serving as private in the Duke of Wellington’s he received the Military Medal and the Croix de Guerre, was mentioned in despatches for gallant conduct during the battle at Bourlon Wood, and was promoted to the rank sergeant for bravery on the field. On his discharge from the Army with a temporary pension, he resumed his former occupation, but before long his health broke down and about 10 months ago he underwent an operation at Beckett’s Park Hospital, Leeds. This did not result in recovery, and his pension in the meantime had been discontinued on the ground that his illness was not attributable to war service. Some time subsequent to his discharge from hospital it appears that Golding appealed to the Army Medical Commissioners for a re-examination, and by the irony of fate a communication granting this request came to hand on the day he died. Steps are now being taken with the object of securing a pension for the widow. The interment took place at Gill Cemetery on Wednesday afternoon, members of the Ivory Hall Working Men’s Club acting as bearers. Wreaths were placed on the coffin from the Ivory Hall and the Discharged Sailors’ and Soldiers’ Club.

The French War Medal has been conferred upon Sergt. George Golding, Duke of Wellington’s Regiment, for conspicuous gallantry and devotion in the attack on Bourlon Wood on Nov. 27th last. A native of Burnley, he was formerly a well-known footballer associated with the Accrington club and later with the Barnoldswick United. He enlisted in the Duke of Wellington’s three years ago, but did not go out to France until February of last year. Sergt. Golding is a married man., his wife and daughter residing at 34, Town Head, Barnoldswick.