George Inskip was the son of Richard and Mary Alice Inskip, née Thornton. Richard was born at Skipton and Mary at Bradley near Skipton, Yorkshire.

George is listed in the Nominal Roll of the 2/6th Battalion Duke of Wellington's (West Riding Regiment): 'B' Coy - Pte G. Inskip. 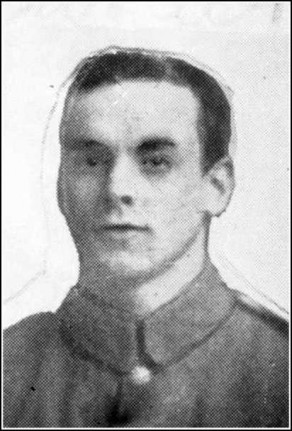 The news was received yesterday (Thursday) morning from the War Office that Private George Inskip, of the Duke of Wellington’s Regiment, son of Mr. Richard Inskip, Farnhill, had been killed in action on the Western Front on November 27th. The deceased soldier enlisted in September 1914. He was at one time a member of the Kildwick Brass Band, and the news will be received with much regret by his many friends.

We reproduce a photograph of Private George Inskip, of the Duke of Wellington’s Regiment, son of Mr. Richard Inskip, Farnhill, whose death in action on the Western Front took place on November 27th 1917, as reported in our last week’s issue. The deceased had been in the Army since September 1914, and his death is much regretted by many friends. He was a grandson of Mr. George Inskip, photographer, of Skipton.

Deceased’s father (Mr. Richard Inskip) was at one time bandmaster of the Kildwick Prize Brass Band, and famous locally as a cornet player. Before his enlistment in September 1914, Private Inskip worked at Messrs. T. and M. Bairstow’s Mill at Sutton. He went to France in February 1916 [sic] with his regiment, the Duke of Wellington’s West Riding Regiment, and was in the big push on May 3rd 1917, when his brother Richard was wounded. His family had not seen him for 15 months when they heard of his death, which was announced by a letter from Second Lieutenant E. R. Storey, who said:– “It may be some small consolation to you to know that he died instantly, and therefore suffered no pain. He was well liked by his comrades in the Company, and his death is a loss to us all. All the officers and men of ‘B’ Company send their warmest and deepest sympathy to you in your most sad bereavement.”

His younger brother, Richard, is at present in hospital at Reading suffering from gunshot wounds in the right hand. This is the third time he has been wounded. He is progressing favourably, and hopes to be home on leave for the New Year.

During the war the membership of the Kildwick and District Prize Band has suffered very much in number and now, under Lord Derby’s scheme, another batch has been attested, and will be called up in their class. Despite the fact that the membership of the band has been reduced, the committee has decided to continue the custom of playing during Christmas and the New Year. The members who have joined the Colours are:– Messrs. J. Smith (killed), G. Inskip, C. Lee, J. Wellock, J. Tatcham, H. Riddiough, F. Drive (discharged), Harry Pollard and W. Ward. Attested: Messrs. W. Hopkinson, H. Walmsley, H. Barker, M. Dawson, R. Knight. Rejected: Messrs. J.W. Hartley, H. Heaton, S. Lister.

Mr. Richard Inskip, of Mary Street, Farnhill, has received official notification regarding his second son, Private Richard Inskip, of the 9th Duke of Wellington’s, informing him that he is suffering from a gunshot wound in the foot, and is now in hospital in Cheshire. Private Inskip joined the forces in August 1915, and went out to France about five weeks ago. Mr. Inskip’s eldest son, Private George Inskip, is also in the Duke of Wellington’s, having joined in September 1914. He was a member of the Kildwick and District Prize Band and is now in the band belonging to his regiment.

SOLDIER WOUNDED – Mr. Richard Inskip, of Hanover Street, Farnhill, has received word that his second son, Richard, has been wounded in the right hand during the recent engagement in France. Pte. Rd. Inskip is in the Duke of Wellington’s Regiment, and bas been wounded twice previously. He is now at a base hospital, and expects to be sent to England shortly. His brother George is also in the same regiment, but did not take part in the engagement, as he was on duty with his officer at a hospital. Before enlisting, Pte. Rd. Inskip was employed by Messrs. John Woodrow and Son.

Mr. Richard Inskip, of Hanover Street, Farnhill, received the sad news on Wednesday that his eldest son, Pte. George Inskip (Duke of Wellington’s West Riding Regiment) had been killed in action. The letter is from 2nd Lieut. E. R. Storey, and reads as follows:– “It is with great sorrow that I have to inform you that your son was killed in action on Nov. 27th last. It may be some small consolation to you to know that he died instantly, and therefore suffered no pain. He was well liked by his comrades in the company, and his death is a loss to us all. All the officers and the men of the ‘B’ Company send their warmest and deepest sympathy to you in your most sad bereavement.” Before enlisting, deceased was employed by Messrs. T. and M. Bairstow, Sutton Mills. He joined the West Riding Regiment in September, 1914, and served with the band at Skipton. Later he trained at Doncaster and Derby, and proceeded to France in February, 1917. Mr. Inskip’s second son, Richard, was in the same battalion as his brother, and is now in hospital at Reading suffering from wounds in his left hand. A third son, Louis, has been rejected from military service. Pte. George Inskip was formerly a member of Kildwick Brass Band, playing the cornet.