Harry Sellers was the son of John and Mary Ann Sellers, née Stansfield. John was born at Bradford and Mary at Sowerby (near Halifax), Yorkshire.

The British Army Service Record for Harry Sellers exists but may be incomplete.

Harry is commemorated in the 'City of Bradford Great War 1914-1918 Roll of Honour' and on the Eccleshill War Memorial, Bradford. 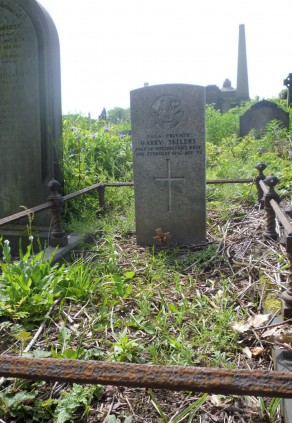 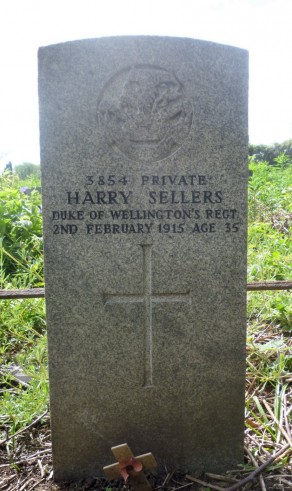 The past week has been an unfortunate one for the 6th (Reserve) Battalion of the Duke of Wellington’s West Riding Regiment, two deaths having been recorded from bronchial pneumonia. These are the first cases of illness which have terminated fatally since the formation of the battalion more than three months ago, and curiously enough both had their origin in an attack of influenza. The men were ordered into hospital towards the close of last week, and everything possible was done for them.

The first death, which took place on Sunday, was that of Pte Burgess who, though attached to the Guiseley Company, was a Hampshire man. He was interred at Waltonwrays Cemetery on Tuesday afternoon, and accorded full military honours. The Guiseley Company, in charge of Captain Claughton, and Lieuts. Ashley and Kilner, together with the battalion, and bugle bands, met the corpse at the gates of the Skipton and District Hospital. Preceding the coffin, which was wrapped in the Union Jack, marched a firing party with rifles reversed. Then came the battalion band, playing the Dead March in Saul, and the bugle band, and the hearse was followed by the officers and men of the deceased’s company. The blinds in the ‘Town Hall and many private houses were drawn, and a large number of the men of the Reserve Battalion, who bad been drilling in the Cattle Market, lined up in High Street and stood at the salute while the cortege passed. The last rites at the grave side were performed by the Rev. A. T. Walkden, curate of the Skipton Parish Church. The firing party shot over the grave and the bugle band played the " Last Post."

The second death took place on Tuesday morning, the unfortunate man being Pte. Sellers of the Bingley Company.

The interment takes place at Undercliffe, Bradford, this (Friday) afternoon, but, in deference to the wishes of the relatives, will not be of a military character. The coffin, however, was escorted out of the town by a party from the deceased’s company yesterday.

Later in the week it was rumoured that other deaths had taken place. On inquiry it was found that these statements were without foundation.

On Monday the headquarters of the Battalion were visited by Brigadier General Brereton, whose object was to inspect the books, which be found in perfect order. The men were at work early on the parade ground off Carleton Road, where they marched, accompanied by the battalion band, in charge of Major Dewhurst. They were not inspected by the Brigadier, who left Skipton early in the afternoon.