Horace Hillary was the son of William Downham and Elizabeth Hillary, née Billows and brother of L/Corporal Harold Hillary (266958) (q.v.). Their father was born at Kettlewell and mother at Skipton, Yorkshire. Horace and Harold were cousins of Private John Hillary (2472) (q.v.) and Private Frank Crossland Billows (15543) (q.v.). 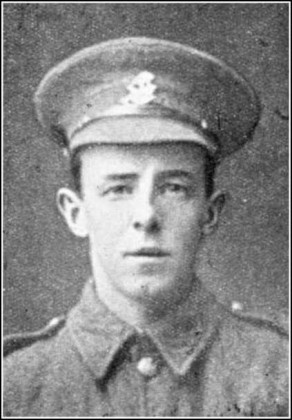 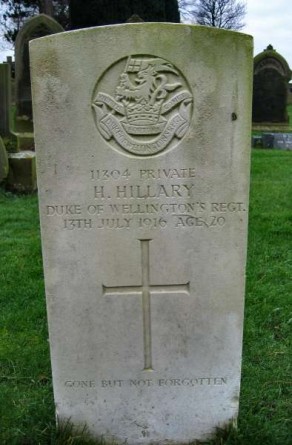 After serving for two months in the Dardanelles, Private Horace Hillary, of the 8th Duke of Wellington’s West Riding Regiment, whose parents reside at 1, Prospect Place, Skipton, has forwarded a postcard home intimating that he has been wounded in the left foot and has arrived in England. The intimation was received by his parents on Tuesday, and from the post mark it appears that the card was posted at Southampton.

Private Hillary is the youngest son of Ex-Sergt. W. D. Hillary, formerly of the 3rd Volunteer Battalion of the Duke of Wellington’s Regiment. He enlisted in August of last year at Skipton, and was sent to Halifax, where he was stationed for three weeks. Afterwards he was in training at Grantham and Milford.

Yesterday morning the parents of Private Hillary received a letter from him from the 1st Western General Hospital, Liverpool. The communication was as follows:– “Just a few lines to let you know I am getting on all right, and am in the best of health at present. No doubt you will think that I have soon got wounded, but you see we have been making a new landing at Suvla Bay, and it says in the papers that we had an easy task, as there were no forces to meet us. But when we landed the beach was swarming with Turks. We soon drove them back with the bayonets with not much loss on our side. That was at eleven o’clock on Friday night, August 6th. On the Saturday we were under shell fire all the day, and we lost a fair number of men. On the Sunday we did not see much fighting, but on the following day we commenced a terrible battle at daybreak, and I got a bullet through my foot about seven o’clock. Then I went through a good deal of pain, and I had to go about three miles to the nearest dressing station, but I arrived there all right about dinnertime. I had a mixture of hopping, rolling and crawling. We had no trenches out there, as we only landed three days prior to me being hit, and that was the reason we lost so many men. My foot is getting on very nicely now.”

Mrs. Hillary, of Prospect Place, Skipton, received information on Wednesday that her son, Pte. Horace Hillary, 9th West Riding Regiment, had been wounded in the recent fighting in France. The same soldier was also wounded in the Suvla Bay landing. He had been admitted to the 8th Stationery Hospital, B.E.F., France.

In a letter the matron says:– “Unfortunately his wounds in the right side and right leg are serious, and his condition in the meantime critical, but I hope that with the good nursing and treatment which he is receiving he may recover.”

As briefly stated in our last issue, Private Horace Hillary, youngest son of Mr. W.D. Hillary, of Prospect Place, Skipton, succumbed to his injuries in the right side and right leg, received in the ‘big push’ at the Manchester Hospital on Thursday of last week. His parents went to Manchester on that day, but death had taken place when they arrived.

Only twenty years of age, deceased enlisted soon after the outbreak of war and took part in the historic landing at Suvla Bay, where he was wounded in the foot and invalided home.

He went out to France about 14 weeks ago, and had been attached to the 9th West Riding Regiment. He was formerly employed by Mr. Fred Anderton, mineral water manufacturer, Skipton.

The funeral took place on Monday afternoon at Waltonwrays Cemetery, the service being conducted by the Ven. Archdeacon Cook.

On Wednesday morning Mr. Wm. D. Hillary of 1, Prospect Place, Primrose Hill, Skipton, received a postcard from his son, Private Horace Hillary, of the 8th West Riding (Duke of Wellington’s) Regiment, stating that he had been wounded in the left foot in action in the Dardanelles, and had now been brought over to England.

CRAVEN CASUALTIES IN THE GREAT ADVANCE

Mr. and Mrs. W.D. Hillary, of 1, Prospect Place, Skipton, on Wednesday last received a letter from the matron of the No. 8 Stationery Hospital, France, stating that their son, Private Horace Hillary, of the 9th West Riding Regiment, had been wounded in the right side and the right leg. His condition was critical, but she hoped with the good nursing and treatment he was receiving he would recover. Yesterday a letter was received from the sister-in-charge of the 2nd Western Hospital, Leaf Square, Pendleton, Manchester, as follows:– “Your son has been admitted to this hospital rather seriously wounded, and I have asked for a free railway warrant to be sent to you from headquarters. I don’t think there is anything serious just at present, but it would be wise for you to come over as soon as you can.”

Pte. Hillary, who is only 20 years of age, enlisted soon after the outbreak of war. He was formerly attached to the 8th Duke of Wellington’s West Riding Regiment, and took part in the landing at Suvla Bay, where he was wounded in the foot. He went out to France about 14 weeks ago. He was formerly employed by Mr. Fred Anderton, mineral water manufacturer, of Skipton.

CRAVEN CASUALTIES IN THE GREAT ADVANCE

Pte. Horace Hillary, of the 9th Battalion Duke of Wellington’s West Riding Regiment, and son of Mr. and Mrs. W.D. Hillary, of 1 Prospect Place, Skipton, has died from wounds received in the recent heavy fighting at the 22nd Western Hospital, Leaf Square, Pendleton, Manchester. Last week Pte. Hillary’s parents received a letter from the sister-in-charge at the hospital stating that their son had been seriously wounded in the right side and leg, and was in a critical condition. They went to Manchester on Thursday of last week, but death had taken place when they arrived. Pte. Hillary, who was only 20 years of age, enlisted soon after the outbreak of war. He was formerly attached to the 8th Duke of Wellington’s Regiment, and took part in the historic landing at Suvla Bay, where he was wounded in the foot and invalided home. He went out to France about 14 weeks ago. He was formerly employed by Mr. Fred Anderton, mineral water manufacturer, Skipton. The funeral took place on Monday afternoon at the Waltonwrays Cemetery, the officiating clergyman being Ven. Archdeacon Cook.