John Hillary was the son of Christopher and Sarah Hillary, née Laycock. Christopher was born at Buckden and Sarah at Leeds, Yorkshire. John was the cousin of L/Corporal Harold Hillary (266958) (q.v.) and Private Horace Hillary (11304) (q.v.).

The British Army Service Record for John Hillary exists but may be incomplete.

John is listed in the Nominal Roll of the 1/6th Battalion Duke of Wellington's (West Riding Regiment): Pte J. Hillary. 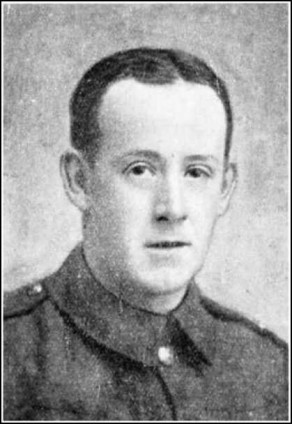 Additional Information: Son of Christopher and Sarah Hillary, of 5, Teer St., Beswick St., Ancoats, Manchester. Born Skipton. (CWGC Headstone Personal Inscription: ONLY PASS HIS MEMORY IN PRIDE AND LET US LIVE AS NOBLY AS HE DIED)

On Wednesday morning news reached Mrs. Smith, of the Broughton Road Post Office, Skipton, that her nephew, Private J. Hillary, of the 1/6th Battalion Duke of Wellington’s Regiment, was in the 10th Stationary Hospital suffering from the effects of gas poisoning. Apparently he met with his mishap at the same time and place as Lance-Corporal Willan.

The telegram conveying the news said permission to visit could not be granted.

Private Hillary joined the 6th Battalion just after the outbreak of war, prior to which he was employed in the Grocery Department of the Skipton Co-operative Society.

On Wednesday evening notification was received that Private Hillary was dead. The official statement of the cause of death was “gassed in action.”

The above is a photograph of Private John Hillary, aged 22 years, grandson of the late Mrs. Hillary, 26 Sackville Street, Skipton, who was one of several Skipton’s brave soldiers of the King who died from gas poisoning at the hands of the Germans on the Western front on December 21st last. Pte. Hillary, who was well-known and much respected by a wide circle friends in Skipton, including the members of the Skipton Conservative Club, joined the 1/6th Battalion Duke of Wellington’s Regiment on the outbreak of war in August, 1914 and, after undergoing the necessary training was drafted, along with his companions, to France, where he had been in the thick of the fighting for many months. He was attacked poisonous gas on December 19th, and died in No. 10 Stationary Hospital at St. Omer, two days later. Prior to joining the King’s Forces, Pte. Hillary was employed in the Skipton Co-operative Stores, and only a few days before the receipt of the sad news had written home to say that he expected spending Christmas with his relatives and friends. His many good qualities will be remembered by his friends, and sincere sympathy is extended to the family.

A Sister at the No. 10 Stationary Hospital, writing to Miss Hillary, of 27 Pendle Street, Skipton on December 30th, states:–

“I am so sorry you have such a shock in hearing about the death of your brother. He was very badly gassed, and was too ill to speak or say anything when he came to this hospital, and he passed very peacefully and quietly away the next day, the 20th. He was buried in the French Souvenir Cemetery here, which is such a quiet and peaceful spot in the country, about a mile and a half out of the town. . . .

It is doubly sad for you, as you were expecting to see him home on leave so soon. Please accept my sincere sympathy to you in your trouble.”

A telegram has been received from the Record Office, York, stating that Private John Hillary, of the 6th West Riding (Duke of Wellington’s) Regiment, has been admitted to the 10th Stationary Hospital at Stomer, suffering from gas poisoning.

Private Hillary is a nephew of Mrs. Smith of the Post Office, Broughton Road, Skipton, and of Miss Hillary of 27 Pendle Street. He was formerly employed in the grocery department of the Skipton Co-operative Society.

A further telegram was received on Wednesday stating that Private Hillary died on December 21st, shortly after he had been admitted to the hospital.