Horace Marshall was the son of Arthur William and Ann Marshall, née Heaton. Arthur was born at Hardcastle, Bewerley and Ann at Bewerley, Yorkshire.

The British Army Service Record for Horace Marshall exists but may be incomplete.

Horace is listed in the Nominal Roll of the 1/6th Battalion Duke of Wellington's (West Riding Regiment): Pte H. Marshall.

A short biography of Horace is included in: ‘Swaledale & Wharfedale Remembered - Aspects of Dales’ life through peace and war’ by Keith Taylor (2006). 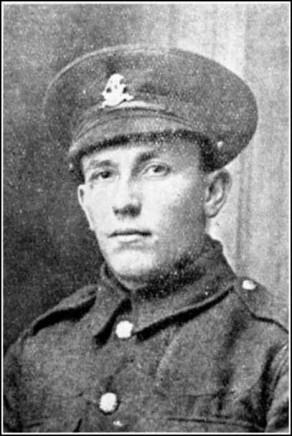 Private Horace Marshall, of the 1/6th (Duke of Wellington’s) West Riding Regiment (Skipton Territorials), was killed in action in France on the 15th inst. Before enlistment, Private Marshall was employed on a farm at Hetton, near Skipton, and his home was at Middlesmoor near Pateley Bridge. He was 24 years of age and went to the front in April last.

CASUALTIES IN THE 6TH DUKE’S

The following casualties were reported from the base under date July 25th:–

Practically the whole of these have been previously been noted in our columns. A possible exception is Private W. Wallwork, who formerly worked at the Belle View Mills of the English Sewing Cotton Company at Skipton, and was well known in local football circles.

One of the latest sacrifices that a Skipton household has been called to make has been brought to light by the sad news of the death of Pte. Norman Smith, son of Mr. John Smith, of 20, Greenfield Street, Skipton. An intimation of the young man's death was received by his parents at the end of last week. It stated:–

“My dear Mrs. Smith, – It is my painful duty to inform you that your son Norman was killed this morning by one of the enemy.

“Death was instantaneous, so the poor fellow had no suffering. At times like these, mere words fail to convey sympathy. I, and my platoon, feel for you in your hour of grief. We realise that we have lost a trusty comrade – a man who always did his duty – a fine type of British manhood. He has been laid to rest quite near Horace Marshall. Poor lad, his troubles are over, and yours is the burden.

Enlisting in October 1914, the deceased soldier joined the ranks of the 6th Battalion Duke of Wellington's West Riding Regiment, and it was while he was fighting with that regiment that he gave his life. Pte Smith was but 26 years of age, and was single. His last letter was received on Friday, July 30th. The late soldier was a journeyman tailor employed by Mr. G. Leathley, of Otley Street, Skipton.

Two other brothers are also in the service of the country. One of them, Private John Wm. Lawson, of the 5th West Yorkshire Regiment, is a prisoner of war at Hostrup, in Germany. The other, Private Norris Gilbert Smith, is attached to the Royal Engineers at Borden, Hants. He is expecting to go to the Front shortly.

MARSHALL - In loving memory of our dear Brother Horace, of the Duke of Wellington’s Regiment, who was killed in action somewhere in France, July 15, 1915, in his 24th year.

Sleep on dear Brother and take thy rest,
They miss you most who loved you best;
We often think of days gone by
When we were all together.
A shadow o’er our lives is cast,
A dear one gone for ever.

True to His King, His Country and His God.
From His loving Sisters Alice and Florence.

In memory of Private Horace Marshall, who was killed in action in France on July 15th, 1915; also his comrade, Private Rhodes Spence, who died of wounds received in action on July 17th, 1915, both of the 1/6th Duke of Wellington’s Regiment.

They were comrades in life,
In death not divided.

MARSHALL - In proud and loving remembrance of our dearly loved and only brother, Horace, who died on the Field of Honour, July 15th 1915, in his 24th year. Also his dear chum, Private Rhodes Spence, died from wounds, July 17th 1915.

A dear kind brother, a loving friend,
Two of the best that God could lend;
They bravely answered Duty’s call,
They gave their lives for those they loved.

The blow was hard, the shock severe,
To part with one we loved so dear;
Our lot is hard, we’ll not complain,
But hope in Heaven we shall meet again.

SPENCE – In loving remembrance of a dear son and brother, Rhodes Spence, who died from wounds, 17th July, 1915, also of his pal, Horace Marshall.

They loved not war; but at their country’s call
They made the grand surrender, leaving all —
Friends, plans, ambitions, all the hope of years.
Their willing hands will toil no more.

On earth there is strife, in Heaven there is rest.
They miss you most who loved you best.

From the Family and Walter in France. 77 Aire View, Silsden.

MARSHALL – To the proud memory of my dear brother, Private Horace Marshall, who fell in action July 15th, 1915, in his 24th year; laid to rest near Ypres.

Years may pass away, darling brother,
But your face will never fade;
For I love you just as dearly
Though you’re in a hero’s grave.

MARSHALL – In loving memory of my dear brother, Private Horace Marshall, 1/6th Duke of Wellington’s, who was killed in action, July 15th, 1915.

Time has passed on, dear brother,
Loving memories still remain;
Hours of joy we have spent together,
Hours we cannot share again.
You left behind some aching hearts
That never could or will forget.

From Florrie and Jack, Newmillerdam.

MARSHALL – In ever loving memory of my dearest brother, Private Horace Marshall, 1/6th Duke of Wellington’s, who was killed in action, July 15th, 1915, aged 24 years.

They sleep with England’s heroes
In the watchful care of God.

“Not just now, but every day, dearest brother, I think of you” – Dearly loved.

“Loved too dearly ever to be forgotten.”

This week it is our painful duty to record the death of yet another Skipton man who has given his life in the service of the country, the patriot being Private Norman Smith, of the 6th Battalion (Duke of Wellington’s) West Riding Regiment.

Private Smith’s home was at 20, Greenfield Terrace, Broughton Road, Skipton, where he resided with his parents until October of last year, when he joined the local battalion. He was 26 years of age, and a single young man, and up to the time of enlistment was employed by Mr. Leathley, tailor, of Otley Street, with whom he had been employed for about two years. Prior to this he was in the service of Mr. H. Watson, tailor and outfitter, of Caroline Square. Perhaps he was best known in the vicinity of Skipton as a footballer, of which he was no mean exponent whilst with the Niffany Rovers team, being a tall, finely built young fellow. His early demise will be lamented by the many to whom he was known both as a sportsman and friend.

On enlistment he proceeded into training with the aforementioned battalion, and in April last went out with it to the Front. The sad news of his death was conveyed to his parents by Lieut. E.J.C. Supple, who is in charge of the 4th platoon of ‘A’ Company, who wrote as follows to deceased’s parents:–

“It is a very painful duty to have to inform you that your son, Norman, was killed this morning (August 5th) by one of the enemy’s bombs. Death was instantaneous, so the poor fellow had no suffering. At times like these mere words fail to convey the sympathy I and my platoon feel for you in your hour of grief. We realise we have lost a trusty comrade, a man who always did his duty, a fine type of British manhood. He has been laid to rest quite near to Horace Marshall, also of ‘A’ Company.”

Private Smith had not been previously wounded, but had been in hospital for a short time suffering from septic poisoning. He had a very narrow escape about three weeks ago, a bomb dropping quite close to him and three other privates whilst they were in the trenches, but fortunately it did not explode, and of course they all escaped injury. The last letter received from Private Smith now makes pathetic reading. It was only received last Friday. In it he stated that he was “in the pink” of condition, that he was expecting to be soon out of the trenches for a week, and was looking forward to the time when he would return to Skipton. He also mentioned that the men of the 6th Battalion were to be granted leave to return home in small sections, though it might be a long time ere he was fortunate enough to get away, as only two or three were allowed leave at a time.

It is interesting to note that Private Smith has two brothers in the Army. One, Private John William Lawson (a half-brother, son of deceased’s mother by her first marriage) was with the 5th [2nd?] West Riding Regiment, but is now a prisoner of war in Germany, being captured in February last. He was at Parchim (Mecklenburg-Schwerin), but has since been returned to a prisoners’ camp at Hostrup. He is a reservist, and would have completed his service with the Army by Christmas, 1914, had not war been declared. The second brother is Private Norris Gilbert Smith, a Royal Engineer, now in course of training at Borden Camp, Hants., he expects to go to the Front shortly, and was home on leave quite recently. Before enlistment he was a porter on the Lancashire and Yorkshire Railway.