John Henry Maslin was the son of Richard and Ann Jane Maslin, née Edmondson; they were married in 1877. Richard was born at Penzance, Cornwall and Ann at Lancaster, Lancashire.

John was married to Jane Rimmer in 1906.

The British Army Pension Record for John Henry Maslin exists but may be incomplete. 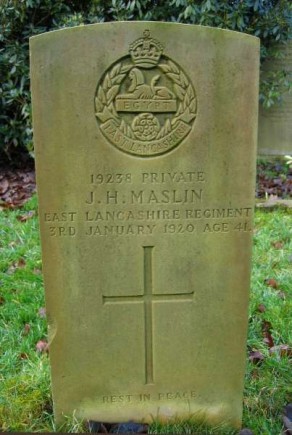 Government tombstones have been sent to the Cowling Parish Churchyard to mark the last resting place of four men who made the supreme sacrifice during the Great War. The stones are neatly shaped and of good material, and bear suitable inscriptions, and the relatives of the deceased are highly pleased with the good taste shown by the authorities in their selection. The following are the deceased servicemen thus represented:–

SAPPER WALTER SNOWDEN, who died at Weymouth on October 30th 1917, in his 34th year; as a result of an attack of pneumonia, was attached to the Royal Engineers, and before joining the Army was in business in Cowling as a plumber and glazier. He belonged to a well-known Cowling family who have resided in the locality for several generations. He was the eldest son of Mr. and Mrs. John William Snowden, now of Sutton-in-Craven, but formerly of Lower Leys Farm, near Cowling. He left a widow, one son and one daughter, who live in Cowling at the present time.

PRIVATE JOSEPH REDMAN, of the King’s Shropshire Light Infantry died at Salop on May 18th, 1916, at the age of 29. He was a native of Cowling, the fourth son of the late Mr. and Mrs. Elias Redman, who were well-known for their interest and activity in connection with the Ickornshaw Wesleyan Church. Before joining up he was employed as an insurance agent in Manchester, and left a widow and one son in that city. Private Redman was brought up in Cowling, and was at one time eminently connected with the Dramatic Society, whilst he was also associated with the Ickornshaw Wesleyan Church and Sunday School.

PRIVATE ARTHUR EDMONDSON, of the Machine Gun Corps, passed away in hospital on November17th, 1918, in his 28th year. He went through some severe fighting in France and Belgium, during two years of active service, and was badly gassed, which injury caused his death. He was a native of Burnley, being the second son of Mr. and the late Mrs. Henry Edmondson, of Burnley, and left a wife and two children who now reside in Cowling.

PRIVATE J.H. MASLIN, of the East Lancashire Regiment, died in hospital at Edmonton on January 3rd, 1920, at the age of 41. He was three years on active service in France, and saw a good deal of fighting. He was a native of Brierfield, near Nelson, and was the son of Mrs. C. Broughton, now of 5 Bird Street, Brierfield. He formerly lived in Nelson, bur removed to Cowling, where his widow, one son and one daughter, now reside.